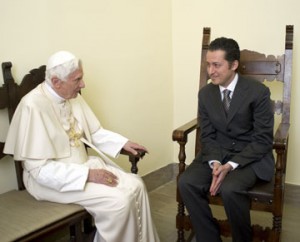 Pope Benedict XVI granted his former butler a Christmas pardon Saturday, forgiving him in person during a jailhouse meeting for stealing and leaking his private papers in one of the gravest Vatican security breaches in recent times.

After the 15-minute meeting, Paolo Gabriele was freed and returned to his Vatican City apartment where he lives with his wife and three children. The Vatican said he couldn’t continue living or working in the Vatican, but said it would find him housing and a job elsewhere soon.

“This is a paternal gesture toward someone with whom the pope for many years shared daily life,” according to a statement from the Vatican secretariat of state.

The pardon closes a painful and embarrassing chapter for the Vatican, capping a sensational, Hollywood-like scandal that exposed power struggles, intrigue and allegations of corruption and homosexual liaisons in the highest levels of the Catholic Church.

Gabriele, 46, was arrested May 23 after Vatican police found what they called an “enormous” stash of papal documents in his Vatican City apartment. He was convicted of aggravated theft by a Vatican tribunal on Oct. 6 and has been serving his 18-month sentence in the Vatican police barracks.

He told Vatican investigators he gave the documents to Italian journalist Gianluigi Nuzzi because he thought the 85-year-old pope wasn’t being informed of the “evil and corruption” in the Vatican and thought that exposing it publicly would put the church back on the right track.

During the trial, Gabriele testified that he loved the pope “as a son loves his father” and said he never meant to hurt the pontiff or the church. A photograph taken during the meeting Saturday — the first between Benedict and his once trusted butler since his arrest — showed Gabriele dressed in his typical dark gray suit, smiling.

The publication of the leaked documents, first on Italian television then in Nuzzi’s book “His Holiness: Pope Benedict XVI’s Secret Papers” convulsed the Vatican all year, a devastating betrayal of the pope from within his papal family that exposed the unseemly side of the Catholic Church’s governance.

The papal pardon had been widely expected before Christmas, and the jailhouse meeting Benedict used to personally deliver it recalled the image of Pope John Paul II visiting Mehmet Ali Agca, the Turkish gunman who shot him in 1981, while he served his sentence in an Italian prison.

The Vatican spokesman, the Rev. Federico Lombardi, said the meeting was “intense” and “personal” and said that during it Benedict “communicated to him in person that he had accepted his request for pardon, commuting his sentence.”

Lombardi said the Vatican hoped the Benedict’s pardon and Gabriele’s freedom would allow the Holy See to return to work “in an atmosphere of serenity.”

None of the leaked documents threatened the papacy. Most were of interest only to Italians, as they concerned relations between Italy and the Vatican and a few local scandals and personalities. Their main aim appeared to be to discredit Benedict’s trusted No. 2, the secretary of state, Cardinal Tarcisio Bertone.

Vatican officials have said the theft, though, shattered the confidentiality that typically governs correspondence with the pope. Cardinals, bishops and everyday laymen write to him about spiritual and practical matters assuming that their words will be treated with the discretion for which the Holy See is known.

As a result, the leaks prompted a remarkable reaction, with the pope naming a commission of three cardinals to investigate alongside Vatican prosecutors. Italian news reports have said new security measures and personnel checks have been put in place to prevent a repeat offense.

Gabriele insisted he acted alone, with no accomplices, but it remains an open question whether any other heads will roll. Technically the criminal investigation remains open, and few in the Vatican believe Gabriele could have construed such a plot without at least the endorsement if not the outright help of others. But Lombardi said he had no new information to release about any new investigative leads, saying the pardon “closed a sad and painful chapter” for the Holy See.

Nuzzi, who has supported Gabriele as a hero for having exposed corruption in the Vatican, tweeted Saturday that it appeared the butler was thrilled to speak with the pope and go home. “Unending joy for him, but the problems of the curia and power remain,” he wrote, referring to the Vatican bureaucracy.

A Vatican computer expert, Claudio Sciarpelletti, was convicted Nov. 10 of aiding and abetting Gabriele by changing his testimony to Vatican investigators about the origins of an envelope with Gabriele’s name on it that was found in his desk. His two-month sentence was suspended. Lombardi said a pardon was expected for him as well. He recently returned to work in the Vatican.

Benedict met this past week with the cardinals who investigated the origins of the leaks, but it wasn’t known if they provided him with any further updates or were merely meeting ahead of the expected pardon for Gabriele.

As supreme executive, legislator and judge in Vatican City, the pope had the power to pardon Gabriele at any time. The only question was when.