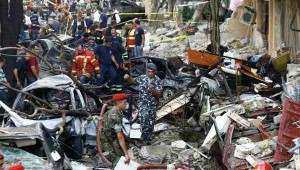 He said the Cabinet, however, agreed to give police access to the content of text messages of “suspicious” cell phone numbers.

The request by ISF topped Cabinet’s agenda during its meeting at the presidential palace in Baabda.

The current cabinet is dominated by the Iranian and Syrian backed Hezbollah-led March 8 alliance.

Both Syria and Hezbollah were accused of assassinating general Hassan.

Sehnaoui reportedly told the Cabinet that ISF’s request for the data is a violation of privacy and constitutional rights.

This is not the first time that Sehnaoui refuses to hand over the telecom data to ISF. ISF request for data in the case of the attempted assassination Last April of Lebanese Forces leader Samir Geagea was rejected.

Commenting on the cabinet’s decision , March 14 MP Ahmad Fatfat said in remarks published in the Al Jamhouriya on Thursday: “If the cabinet made such a decision , it can only mean that it has exposed itself as a party to the crimes that have taken place and those that are being planned for the future …in other words assassinations will continue as long as this cabinet is in power”