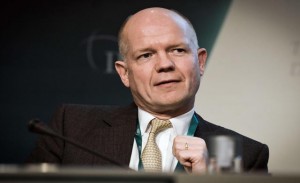 The Middle East peace process must be revived urgently given developments in the Israel-Palestinian conflict, with the United States playing a key role in doing so, Britain said Monday.

“There is an urgent need … to restart the Middle East peace process,” British Foreign Secretary William Hague said as he went into a day-long meeting with his EU colleagues.

The situation had changed, especially with Israeli plans for major new settlements in East Jerusalem and the UN vote to upgrade the Palestinians’ diplomatic status, Hague said.

Accordingly, he called on the United States to get involved again so as to drive the peace process forward and he would be urging his EU partners to do all they could to help too.

Last week, Britain summoned Israel’s ambassador for talks about the new settlement plans which also saw the European Union take a similar step in protest at a move widely condemned as a threat to any peaceful solution.

EU foreign ministers Monday have a heavy agenda, with Syria a major issue.

Hague said he was happy that EU ministers would meet the head of the newly-formed Syrian opposition coalition and hoped that other members would follow France and Britain’s leading in giving the group full recognition.

Britain would continue practical measures such as humanitarian aid and advice and more could be done as rebels seek to oust Syrian President Bashar al-Assad but Hague stressed that the issue of arms supplies did not arise now.

He said the EU had just rolled over its arms embargo on all Syrian parties for another three months and therefore any change “is for a later date.”

On Egypt, another talking point for ministers Monday, Hague said “we want to see effective dialogue… we want to see Egypt have a functioning democracy.”

Earlier Monday, Egyptian President Mohamed Mursi ordered the army to take on police powers — including the right to arrest civilians — in the run-up to a divisive constitutional referendum that has triggered mass street protests.