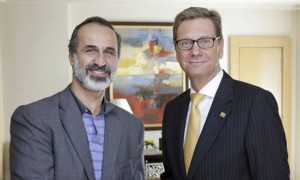 EU foreign ministers have met in Brussels with the head of the newly formed Syrian opposition coalition, with some arguing Ahmed Mouaz al-Khatib should be recognised as the legitimate replacement for President Bashar al-Assad.

Welcoming Khatib “is a clear signal of how the status of the Syrian coalition is being reviewed,” German Foreign Minister Guido Westerwelle said on Monday as he went into a meeting with his EU colleagues where Syria was to figure strongly.

“It is a coalition which represents the legitimate interests of the Syrian people. We want that to be recognised as such by the European Union,” Westerwelle said.

Earlier British Foreign Secretary William Hague said he was happy that EU ministers would meet Khatib and hoped that other member states would follow Paris and London in giving the group full recognition.

The EU currently recognises the coalition as “legitimate representatives of the aspirations of the Syrian people,” which falls short of recognising it outright as a potential successor government.

Full recognition could allow Western powers to arm rebel forces seeking to oust Assad but that is a sensitive issue, with some EU member states still cautious about the possible unintended consequences of such a step.

The EU recently rolled over its arms embargo on all Syrian parties for another three months to March 1.

EU foreign policy head Catherine Ashton met Khatib earlier on Monday, saying she had stressed that the new coalition had to ensure that it included all opinion in Syria and that it was committed to democratic standards.

After the talks, the European Commission announced that it would provide another $39m in humanitarian aid to help people affected by the Syrian civil war, bringing its total contribution to some 163 million euros.

Westerwelle said that Germany had expelled four Syrian embassy staff as part of a drive to reduce ties with Assad.

Berlin has told Syria’s acting envoy that the four people have until Thursday to leave the country.

“With the expulsion of the four embassy employees announced today we are sending a clear message that we are reducing relations with the Assad regime to an absolute minimum,” Westerwelle said in a statement.

functioning institutions for a political transition.”

Germany expelled the Syrian ambassador in May.

Meanwhile, the EU also said on Monday that it was “deeply dismayed” by Israeli plans for new West Bank settlements which threaten peace efforts that instead need to be revived, according to a draft prepared for the foreign ministers.

“The European Union is deeply dismayed by and strongly opposes Israeli plans to expand settlements in the West Bank,” said a draft of the conclusions on the Middle East peace process in Brussels.

The plan “would seriously undermine the prospects of a negotiated resolution of the conflict” since it would question the viability of the two states supposed to emerge through the peace process, it said.

On the day it was awarded the Nobel Peace Prize, the EU “reiterates that settlements are illegal under international law and constitute an obstacle to peace,” it added.