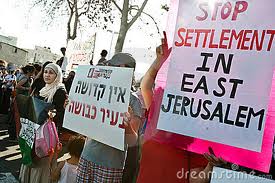 The European Union warned Israel of unspecified consequences Monday if it goes through with plans to build thousands of new settler homes in Jerusalem and the West Bank.

The bloc’s 27 foreign ministers said they were “deeply dismayed” by Israeli plans to expand settlements in East Jerusalem and particularly the E1 project, which would separate the West Bank from east Jerusalem, the Palestinians’ hoped-for capital, and drive a big wedge between the northern and southern flanks of the West Bank.

“The E1 plan, if implemented, would seriously undermine the prospects of a negotiated resolution of the conflict by jeopardizing the possibility of a contiguous and viable Palestinian state and of Jerusalem as the capital of two states,” said the ministers said in a joint statement. “It could also entail forced transfer of civilian populations.”

The EU views any Israeli settlements on territory occupied during the 1967 Mideast war as a breach of international law.

“The EU will closely monitor the situation and its broader implications and act accordingly,” the ministers said.

The Israeli government reacted by calling the EU focus “mistaken.”

“Facts and history both prove that Jewish settlement never constituted an obstacle to peace,” said Israeli Foreign Ministry spokesman Yigal Palmor. “Therefore, the EU’s focus on this issue is mistaken.”

Netanyahu also decried what he saw as a double-standard.

“We cannot accept that when Jews build homes in their ancient capital, Jerusalem, the international community has no problem finding its voice, but when Palestinian leaders openly call for the destruction of Israel, the one and only Jewish state, the world is silent,” Netanyahu said Monday.

“What the Israelis did on E1 has shifted opinions in Europe,” Bildt said. “I don’t think the Israelis are aware of this.”

Some advocacy groups want the EU to prohibit the sale of goods made by Israeli settlers from being labeled as made in Israel. The labeling issue may come up but was not officially on the agenda.

The 27 EU foreign ministers also considered the crisis in Syria, where activists say more than 40,000 people have died since an uprising against President Bashar Assad began in March 2011.

They were briefed by Mouaz al-Khatib, a moderate cleric who heads the new, Western-backed opposition coalition in Syria. Hard-line Islamist groups in the country have not joined the new coalition, and al-Khatib told the EU ministers about attempts to unify the Syrian opposition as the coalition seeks greater diplomatic recognition.

The EU does not itself offer formal recognition — that is left to the individual member countries — but it has said the coalition is a legitimate representative of the Syrian people.

EU ministers said they were seriously concerned about the potential use of chemical weapons in Syria.

“In a situation of chaos, it is exceedingly dangerous if these things start floating around in the region,” Bildt said.

Bildt said Syria’s chemical weapons would be discussed, as well.

“In a situation of chaos, it is exceedingly dangerous if these things start floating around in the region,” he said.

EU foreign policy chief Catherine Ashton said many members have been urging the EU to move on bringing war crimes charges against Assad.

“We must recognize the terrible situation in Syria and the responsibility he bears for it,” Ashton said.

Syria is not a party to the International Criminal Court and the U.N. Security Council has not referred the conflict to the war crimes tribunal.

Also Monday, the foreign ministers approved the concept of an EU noncombat training mission in Mali, where the central government has lost control of the northern part of the African nation to armed Islamist groups.

The U.S. and the European Union want the Malian army and other African troops to be properly trained before they try to retake the north.

The move allows EU military planners to start preparations for the mission, which would provide instruction to the Malian military. Another council decision will be needed before the Mali mission is deployed.