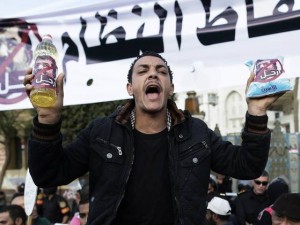 A national dialogue committee said a referendum on a disputed draft constitution will be held on schedule, but President Mohammed Morsi has agreed to rescind the near-absolute power he had granted himself.

The statement came after a meeting that was boycotted by the main opposition leaders who are calling for the Dec. 15 vote to be canceled.

Morsi had called for the dialogue to try to defuse a spiraling crisis, but the decision appeared unlikely to appease the opposition since it recommends the referendum go ahead as scheduled. Morsi’s initial declaration was to be rendered ineffective anyway after the referendum.

Gamal Eid, a human rights lawyer, said the recommendations to rescind some powers were a “play on words” since Morsi had already achieved the desired aim of finalizing the draft constitution and protecting it from a judicial challenge.

The charter, which would enshrine Islamic law and was drafted despite a boycott by secular and Christian members of the assembly, is at the heart of a political crisis that began Nov. 22 when Morsi granted himself authority without judicial oversight.

Opposition activists are camping outside the presidential palace and are calling for more protests on Sunday.

Several rallies on both sides have drawn tens of thousands of people into the streets and sparked fierce bouts of street battles that have left at least six people dead. Several offices of the president’s Muslim Brotherhood also have been torched in the unrest.

Selim al-Awa, an Islamist at the meeting, said the committee found it would be a violation of earlier decisions to change the date of the referendum.

However, the committee recommended removing articles that granted Morsi powers to declare emergency laws and shield him from judicial oversight.

Members of the committee said Morsi had agreed to the recommendations, but there was no confirmation from the Islamist leader.

Bassem Sabry, a writer and activist, called the changes a “stunt” that would embarrass the opposition by making it look like Morsi was willing to compromise but not solve the problem.

“In the end, Morsi got everything he wanted,” he said, pointing out the referendum would be held without the consensus Morsi had promised to seek and without giving people sufficient time to study the document.

The majority of the 54 members of the committee were Islamists, as well as members of the constitutional panel that drafted the disputed charter. But the main opponents were not present at the meeting, which lasted over 10 hours.

The panel also said that if the constitution is rejected by voters, Morsi will call for the election of a new drafting committee within three months, a prospect that would prolong the transition.

Opponents say the draft constitution disregards the rights of women and Christians.

The president has insisted his decrees were meant to protect the country’s transition to democracy from former regime figures trying to derail it.

The deepening political rift in Egypt had triggered an earlier warning Saturday from the military of “disastrous consequences” if the constitutional crisis isn’t resolved through dialogue.

It was the first political statement by the military since the newly elected Morsi sidelined it from political life.

Weeks after he was sworn in, Morsi ordered its two top generals to retire, and gave himself legislative powers that the military had assumed in the absence of parliament, which had been dissolved by the courts.

The military said serious dialogue is the “best and only” way to overcome the conflict, which has left the country deeply divided between Islamist supporters of the president and his mostly secular opponents.

“Anything other than (dialogue) will force us into a dark tunnel with disastrous consequences, something which we won’t allow,” the military said in a statement broadcast on state TV and attributed to an unnamed military official.

Heightening the tension, Hazem Abu Ismail, the leader of group of radical Islamists staging a sit-in outside a media complex on the outskirts of Cairo, gave a thinly veiled threat of more violence, saying the protest outside the presidential palace was an “affront” to the president and will not be tolerated.

Earlier this week, the area around the palace was the scene of the worst civilian clashes since Morsi came to power.

In an attempt to calm the situation, Morsi called for Saturday’s dialogue. But the main opposition leaders refused to attend, saying it didn’t address their main demands and was being held under the threat of violence against protesters.

“No reasonable person would agree to be part of a dialogue held at the point of a sword,” the National Salvation Front said in a statement.

The crisis began Nov. 22 when Morsi granted himself authority free of judicial oversight, mainly because he feared a looming court decision that was expected to declare the Islamist-led constitutional drafting assembly illegal and order it disbanded. The assembly then quickly adopted a draft constitution despite a walkout by Christian and secular members.

The moves touched off a new wave of opposition and unprecedented clashes between the president’s Islamist supporters, led by the Muslim Brotherhood, and protesters accusing him of becoming a new strongman.

With the specter of more fighting among Egyptians looming, the military sealed off the presidential palace plaza with tanks and barbed wire.

State media also reported that the government was working on a new law to allow the military to arrest civilians, but there was no official word on that either.

The state-owned Al-Ahram newspaper quoted an unnamed military official as saying the move would be “preventive” if the situation worsened.

The report could not be independently confirmed and the law would have to be signed by Morsi before it takes effect.

At the presidential palace sit-in on Saturday, TV footage showed the military setting up a new wall of cement blocks around the palace.

Muslim Brotherhood spokesman Mahmoud Ghozlan accused the opposition of seeking the military’s return to politics by “pushing matters to the brink.”

He said the military statement showed it agrees on the legitimacy of the elected president, the referendum plans and state institutions, and will protect them from any “attack.”

Badie said the opposition, which has accused his group of violence, is responsible for attacks on Muslim Brotherhood offices. He also claimed that most of those killed in last week’s violence at the palace and other governorates were Brotherhood members.

“These are crimes, not opposition or disagreement in opinion,” he said.

Meanwhile, the opposition accused gangs organized by the Brotherhood and other Islamists of attacking its protesters, calling on Morsi to disband them and open an investigation into the bloodshed.

Meanwhile, with dialogue boycotted by the main opposition players, members of a so-called Alliance of Islamists forces warned it will take all measures to protect “legitimacy” and the president — comments that signal further violence may lie ahead.

Mostafa el-Naggar, a former lawmaker and protest leader during the uprising that led to Mubarak’s ouster in February 2011, said the Brotherhood and military statements suggested the crisis was far from over.