In Syria even marriage is an act of revolution 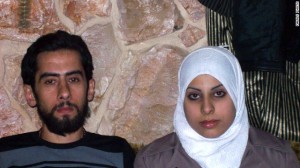 Ayat Al-Qassab carefully slipped the beaded satin wedding gown over her small frame. She peered at herself in the rusted mirror and cautiously smiled. For a moment, her war-torn world was transformed and she was a beautiful bride — free, safe and happy.

A mortar shell exploded somewhere near her Syrian home in Homs, waking her from a daydream. She quickly wrapped a white headscarf tightly around her hair and prepared to leave for her wedding.

Only a week earlier, Al-Qassab met her husband-to-be, Mohammad Jumbaz. Their families had coordinated the introduction. He was a pastry chef and part-time fighter for the rebel Free Syrian Army which wants to oust President Bashar al-Assad. She was 18 and from a family who didn’t like the al-Assad government.

They took no lingering looks across the room, and time didn’t stand still when their eyes met. They simply chatted as Syria’s nearly 20-month-old civil war rumbled in the background.

“I had a feeling in my heart,” Jumbaz said, recalling that day. “I cannot describe it to you.

During the interview, a shell boomed in the distance.

“In a time when we are under siege and there are sounds like this, I told my mother I decided to fulfill half my religion and to get married,” he said, “and without ever even seeing my bride, everything went perfect.”

“We saw each other and we liked each other,” she said, “and in just one week we were married to each other.”

Homs has borne the brunt of the Syrian military’s wrath since violence broke out nearly two years ago in the nation. Many who live in the city consider it to be the unbowed guardian of the Syrian revolt. A massacre in the spring killed scores of women and children.

There, even marriage is an act of revolution.

“We must get married. Our lives must continue,” Jumbaz said defiantly. “We have not surrendered, and we will not surrender. This is a promise. A promise we will keep, God willing.”

Out of respect for the dead, the couple held a small ceremony in the family apartment rather than a traditional large and noisy Syrian wedding.

“It was not appropriate to dance and play music,” Jumbaz said. “We recently received the body of my martyred brother, and many other families have martyrs as well. So it was a small family affair.”

Speaking via Skype, the couple seems to have little interest in chatting about romance or the frivolities of weddings. Instead, both are enthralled with their love for revolution and an ancient country that appears lost to war and strife.

“I wore a white dress, but we did not have a traditional wedding because of this animal in power,” Al-Qassab said. “We hope once the regime falls we can have a wedding, because our happiness is the end of this government.”

The couple spent their honeymoon at home, struggling to survive as al-Assad’s forces relentlessly shelled Homs.

But Al-Qassab said she is very happy to stay.

“Here, we have our pride and we are defending our nation,” she said. “I would prefer my honeymoon to be here amid the bombs and shells then for me to abandon my nation.”

In the Middle East, where arranged marriages are common, there is an Arabic word for love after marriage: “ashra.” It means the love from living life together. It is emotion based on mutual respect, understanding and a need for a partner to survive all life’s struggles.

“I am not upset that I got married under these circumstances,” Al-Qassab said. “The opposite. I am proud that I married one of the revolutionaries, and I am proud to be here in old Homs defending my nation and my dignity.”

Now, after more than a year and a half of violence, living life amid the constant killing and dying is the greatest form of rebellion for the couple.

“I took this step, because I am a man who has faith in God and destiny,” Jumbaz said. “The days that passed were very hard on us. I still thank God for everything, but I felt something was missing in my life. I do not know how to describe it.

“Every day was a struggle, but something was missing.”

A baker becomes a fighter

Before the Syrian civil war turned Homs into a conflict zone, Jumbaz owned a baked-sweets business, selling cakes and candy to the mainly pro-government Allawi and Christian districts near his native neighborhood in Homs’ Old District.

“When my brother was killed, I decided to return to my community and support my people, because what was happening was unjust,” he said. “Seventy percent of my friends have been killed in this and that massacre. This is an unbearable level of injustice.”

Al-Assad must be tried for war crimes, he believes.

Jumbaz joined the rebel Free Syrian Army and fought alongside other members of the armed opposition to liberate an opposition enclave in Homs.

While the Old District remains under siege and constantly sustains shelling and mortar fire, Syrian troops remain outside the neighborhood, stationed along the outskirts of the suburb.

“There are enough Free Syrian Army troops to protect us now, but I noticed how difficult the situation is around us,” Jumbaz said.

“The kids wanted sweets and many of the women were craving desserts, so I am trying to bake sweets again,” he said.

Faithful and not afraid

Al-Qassab said she visits her parents and relatives every day to help with household duties, and she checks on the well-being of her neighbors until the evening, when her new husband returns home.

“I am not afraid of anything happening to him, and I thank God. We are all willing to sacrifice our lives for Syria,” Al-Qassad said. “I thank God above all else.”

Another single loud explosion thundered in the background as they spoke. The couple didn’t even flinch.

“I pray no one is hurt” Jumbaz calmly said. He turned to his wife, who wore a faded purple coat and tight black headscarf.

“Please, go ahead,” he said, kindly signaling her to speak.

“We will not surrender, God willing,” she said. “We are walking along the righteous path. My cousins, my neighbors, the children of my neighbors all died, and many more have lost their lives. But I am not sad. We will be victorious in this life and the afterlife.”

Al-Qassab looks older than her 18 years, and she speaks with impenetrable courage and bravery that generally masks any semblance of a giggling blushing bride only a few weeks into her marriage.

“We were married September 13, 2011,” she said before finally cracking a smile and beginning to laugh. “I mean 2012.” She turns to her husband, blushing and embarrassed. He looks down to hide that he is laughing, too, instead mumbling to correct her: “2012.”

Nothing it seems but sheer faith in God moves the newlyweds and inspires them to love, and to fight and resist forces in Syria they feel must end.

After nearly every sentence, they defiantly say “Alhamdulillah,” a common Muslim phrase meaning “I thank God.”

“And if not our kids, then the children of our community even if we die,” her husband adds. “Alhamdulillah.”