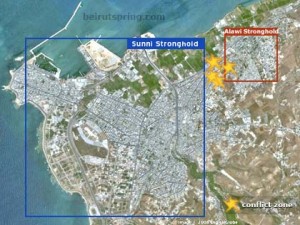 Gunmen loyal to opposite sides in neighboring Syria’s civil war battled in the streets of northern Lebanon on Wednesday, and the death toll from two days of fighting was at least five killed and 45 wounded, officials said.

The Lebanese army fanned out in the city of Tripoli to calm the fighting, with soldiers patrolling the streets in armored personnel carriers and manning checkpoints. Authorities closed major roads because of sniper fire.

The fighting comes at a time of deep uncertainty in Syria, with rebels closing in on President Bashar Assad’s seat of power in Damascus. U.N. Secretary-General Ban Ki-moon on Wednesday urged Syria’s regime against using its stockpile of chemical weapons, warning of “huge consequences” if President Bashar Assad resorts to such weapons of mass destruction.

“I again urge in the strongest possible terms that they must not consider using this kind of deadly weapons of mass destruction,” Ban told The Associated Press, speaking on the sidelines of a climate conference in Qatar.

Syria has been careful not to confirm that it has chemical weapons, but the regime insists it would never use them against the Syrian people.

Ban also suggested that he would not favor an asylum deal for the Syrian leader as a way to end the country’s civil war and cautioned that the United Nations doesn’t allow anyone “impunity.” Assad has vowed to “live and die” in Syria, but as the violence grinds on there is speculation that he might seek asylum.

The Syria conflict has spilled over into Turkey, Israel and Jordan over the past 20 months, but Lebanon is particularly vulnerable to getting sucked in. The countries share a complex web of political and sectarian ties and rivalries that are easily enflamed. Lebanon, a country plagued by decades of strife, has been on edge since the uprising in Syria began, and deadly clashes between pro- and anti-Assad Lebanese groups have erupted on several occasions.

Tensions in Tripoli have been mounting since last week, when reports emerged that at least a dozen Lebanese Sunni fighters were killed inside Syria, apparently after they joined the rebellion against Assad.

Security officials said at least five people have been killed and 45 wounded since Tuesday. They asked that their names not be published because they are not authorized to speak publicly.

Syrian rebels are predominantly Sunni whereas Assad and his inner circle are dominated by Alawites, an offshoot of Shiite Islam.

Syria’s uprising began with peaceful protests in March 2011 and later escalated into a civil war that the opposition says has killed more than 40,000 people.