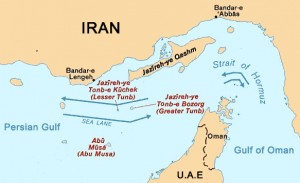 Iran said on Tuesday it had captured a U.S. intelligence drone in its airspace over the Gulf in the last few days, but the U.S. military quickly denied having lost any unmanned aircraft in the Middle East.

The incident highlighted tensions in the Gulf as the Islamic Republic and the United States demonstrate their military capabilities in the vital oil exporting region in a standoff over Iran’s disputed nuclear program.

Iran has repeatedly threatened to close the Strait of Hormuz – through which about 40 percent of the world’s seaborne crude oil is shipped – if it comes under attack. U.S. commanders have said they will not let that happen.

The Islamic Revolutionary Guards Corps (IRGC) said on its website that the ScanEagle drone had been flying over the Gulf in the last few days and was “captured” when it strayed into Iranian airspace.

A spokesman for U.S. Naval Forces Central Command in Bahrain said no U.S. drone had gone missing in the region.

“The U.S. Navy has fully accounted for all unmanned air vehicles (UAV) operating in the Middle East region. Our operations in the Gulf are confined to internationally recognized water and air space,” Commander Jason Salata said.

“We have no record that we have lost any ScanEagles recently.”

The IRGC statement did not specify when or where the drone was caught, or whether the unmanned spy plane was shot down or crashed. But it released what it said was video of an apparently undamaged ScanEagle being examined by uniformed officers beneath a sign reading “We shall trample on the U.S.” in English.

The incident is the latest in a string of complaints by Iran over what it says are U.S. violations of its territory in an often clandestine conflict over Tehran’s nuclear program that has featured assassinations, espionage and cyber sabotage.

The ScanEagle is a 4-ft (1.25-metre) long “off the shelf” spy plane manufactured by U.S.-based Boeing. The company also supplies and operates drones for customers in several Middle Eastern countries, including to help ensure oil platform security in the Gulf, according to its website.

Iran and OPEC rival Saudi Arabia have also accused each other of violating each other’s territory near oil and gas fields in the Gulf over the past year.

In November, the United States said Iranian warplanes shot at a U.S. surveillance drone flying in international airspace. Iran said the aircraft had entered its airspace to spy on Iranian oil platforms and said it would respond “decisively” to any incursions.

Khazaee said that U.S. craft had entered southern Iran seven times in October around Bushehr where Iran’s only nuclear power station is situated.

A year ago to the day, Iranian forces announced they had captured a U.S. RQ-170 reconnaissance drone in eastern Iran which was reported lost by U.S. forces in neighboring Afghanistan.

Iranian commanders have since announced they have extracted valuable technology from the aircraft and were in the process of reverse-engineering it for their own defense industry.

The United States and its allies believe Tehran is trying to develop nuclear weapons and have imposed tough economic and financial sanctions. Iran says its program is purely peaceful.

Israel has threatened to bomb Iranian nuclear sites if diplomacy and sanctions fail to stop its nuclear activities. In October, Israel shot down an Iranian-made drone launched into the Jewish state by Lebanese Islamist group Hezbollah.

According to Boeing’s publicity material, the ScanEagle drone can be launched by a catapult from mobile vehicles or small ships, making it independent of runways.

It can fly pre-programmed or operator-run missions guided by the U.S. Global Positioning System (GPS) and its onboard flight control system.

It is retrieved using a “Skyhook” system in which the drone catches a rope hanging from a 50-ft (16-metre) high pole.