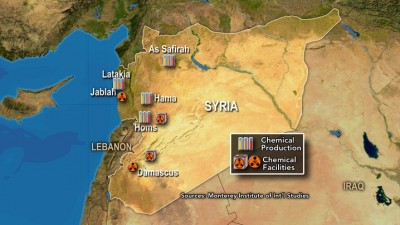 President Obama gave a sharp warning Monday to Bashar al-Assad, the Syrian dictator who is fighting a rebellion by his own people.

Assad has not used his chemical weapons, including nerve gas, but the possibility that he might threatens to pull the United States into that conflict.

Here is how President Obama put it:

“I want to make it absolutely clear to Assad and those under his command: The world is watching,” the president said. “The use of chemical weapons is and would be totally unacceptable. And if you make the tragic mistake of using these weapons, there will be consequences and you will be held accountable.”

One of Syria’s chemical weapons bases can be spotted in commercial satellite photos. U.S. monitoring of roughly two dozen bases like this indicates the Assad regime has begun preparing its chemical weapons for use. Orders have been issued to bring together chemical ingredients which are normally stored separately for safety, but when combined, form the deadly nerve agent sarin.

Throughout months of heavy fighting, intelligence analysts have said Assad remained confident he would defeat the uprising. But now the fighting has crept so close to Damascus that airliners are refusing to land. Syria experts say the regime may have pushed the panic button, although the Syrian foreign ministry repeated today that the Assad dictatorship would never use such weapons against its own people.

Secretary of State Hillary Clinton said the use of chemical weapons enough to call in the U.S. troops.

“This is a red line for the United States,” she said. “I’m not going to telegraph in any specifics what we would do in the event of credible evidence that the Assad regime has resorted to using chemical weapons against their own people, but suffice it to say we are certainly planning to take action if that eventuality were to occur.”

For now, the Obama administration is backing up its public warnings by sending private messages to Assad through one of his few remaining allies, Russia.