Salameh headed a delegation to promote investments in Lebanon under the slogan “Lebanese capital markets day” which is being held for the first time in the center of the British capital.

Salameh is planning a stimulus package to kick-start the economy, which has been hit by the conflict in neighboring Syria, the country’s Central Bank governor said Monday.

“This event sheds the light on the great investment opportunities provided by Lebanon,” Salameh said during the event, drawing attention at London’s key role in backing financial institutions and the overall banking sector in Lebanon. 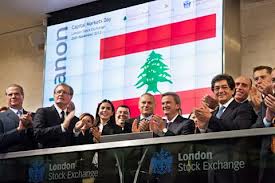 “The great deal of interest we are getting is very encouraging, and we are looking forward to discussing a series of suggestions by Lebanon with a group of international investors,” Salameh added.

“The Central Bank is aware that there is less external demand on the Lebanese economy and is preparing to launch a stimulus package that would include housing loans, loans to the productive sector and loans for the energy substitution sector.”

Salameh said he did not yet have complete details of the size of the package, but would be able to provide more information by the end of the year.

The housing loan support would be for new loans, and the program would be in place for at least a year, Salameh said. He reiterated recent comments that Lebanese growth will be around 2 percent this year, but declined to give a forecast for next year.

“The IMF and other agencies’ expectations are for us to have growth next year, maybe the same as this year.”

He said the budget would have a primary surplus this year, and deposits have grown at a rate of 7 percent in 2012, mostly from the domestic depositor base.

Inflation was likely to reach 6 percent this year, however, with a target for next year below 4 percent, Salameh added.

“We did not intervene selling [dollars] in the market. Since Aug 2011, we have been buyers of the dollar in the market, for this year we have purchased over $1.5 billion,” Salameh said.

“The Syrian unrest has affected the overall investment and consumer environment,” Riad Salameh told Reuters in an interview on the sidelines of a Lebanon investment day at the London Stock Exchange.

Civil war in Syria is taking its toll on several sectors of the economy of Lebanon, where exports have tumbled 12 percent.

Domestic instability has also taken its toll on the economy, with tourism revenues falling as much as 15 percent after Gulf countries warned their citizens to stay away from Lebanon, following the uprising and after Bahrain accused Hezbollah of interfering in its own internal affairs.

Lebanon’s industry is also struggling under daily three-hour power blackouts in the capital, which have caused protests. In outlying areas, daily cuts can last more than 12 hours a day.

The delivery of the first of two electricity-generating barges from Turkey, which the government promised would boost supply, has been delayed because the government has failed to pay.

“I know that things are progressing in terms of getting these barges ,” Salameh said.

“Usually the government decides just for the winter period to provide certain subsidies on fuel that is used for heating to allow the people to heat their homes,” Salameh told Reuters

salameh’s 2004 directive forbidding Lebanese banks from subprime lending and purchasing exotic derivatives is credited with shielding the domestic banking system from the consequences of the collapse of Lehman Brothers; and his prudent monetary policy along with high interest rates contributed to strong growth in bank deposits.