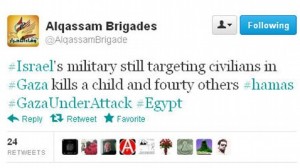 As the Israeli Defense Forces waged a military campaign on Hamas targets in Gaza today, a different kind of war unfolded on Twitter between the two groups.

“We recommend that no Hamas operatives, whether low level or senior leaders, show their faces above ground in the days ahead,” said a tweet from the @IDFspokesperson account today. The tweet followed news that the Israeli attack had taken out Ahmed Jabari, the chief of staff of the Ezzedeen al-Qassam Brigades and leader of the military wing of Hamas.

Hamas launched mortars in retaliation, but also fired back on Twitter.

“Our blessed hands will reach your leaders and soldiers wherever they are (You Opened Hell Gates on YouThroughout the day, the warring groups used their Twitter accounts to provide real-time updates about the military action. The IDF account even broke the news of Jabari’s death on Twitter and quickly posted a video of the strike that was said to have killed him.

“Hamas continues to try to kill Israeli civilians. So far today, the Iron Dome has intercepted 17 rockets fired from #Gaza,” another update said, referring to the missile defense system installed with the help of the U.S. 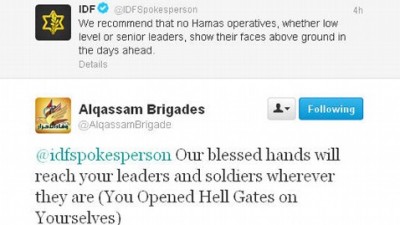 Meanwhile, the militant unit of Hamas said it had shelled numerous Israeli bases.

“Al Qassam hit Isnad Sofa base with 6 mortars in response on assassination of its leader,” a recent update said, as the Twitter war continued well into the evening.rselves),” said a tweet from the @AlqassamBrigade handle that was directed to the Israeli Defense Forces Twitter.