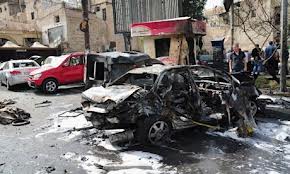 A taxi packed with explosives blew up near a police station in the Syrian capital Sunday, killing 13 people as the U.N. envoy tasked with ending the country’s civil war pushed his call for a cease-fire in talks with President Bashar Assad.

The blast, which also wounded 29 people in the popular shopping district of Bab Touma, was overshadowed however by anti-Syria violence in neighboring Lebanon.

Hundreds of angry Lebanese protesters tried to storm the government headquarters in the capital, Beirut, blaming Syria for the Friday assassination of a top Lebanese intelligence official and accusing the government of being far too close to the Assad regime. For much of the past 30 years, Lebanon has lived under Syrian military and political domination.

In Syria, two government officials speaking from the scene of the blast said the taxi exploded 50 meters (yards) from the main police station in Bab Touma, a neighborhood in Damascus’ Old City. They insisted on anonymity because they were not allowed to brief the media.

An Associated Press reporter at the site said blood stained the street and sidewalks, shards of glass littered the pavement from shattered shop windows, and the charred hulks of at least four cars littered the street.

Vegetable vendor Mohammad Hanbali, 27, said several people wounded in the blast were lying on the street when he rushed to help.

“It’s a cowardly act, carried out by terrorists,” said Hanbali, who was hit by a piece of shrapnel in the left leg.

State news agency SANA put the death toll at 13, while the anti-regime Syrian Observatory for Human Rights said at least 10 people were killed.

Damascus has been a frequent target of bombings in recent months, although it was once largely immune to the violence spreading across the country since the anti-Assad revolt began in March 2011.

There was no immediate claim of responsibility for Sunday’s blast, but Islamist groups fighting alongside the rebels have in the past said they target security installations in the capital.

In another part of the city, U.N. and Arab League envoy Lakhdar Brahimi met with Assad to push for a cease-fire between rebels and government forces for the four-day Muslim holiday of Eid al-Adha, which begins Oct. 26.

Brahimi said that he met earlier with Syrian opposition groups inside and outside the country to discuss his truce plan. He said he received “promises” but “not a commitment” from them to honor the cease-fire.

He told reporters that he “found an overwhelming response” from Assad’s opponents to his cease-fire plan and that “all of them have said that it’s a good idea which they support.”

He declined to reveal Assad’s response to his plan, viewed as a preliminary step toward a larger deal.

SANA reported that Assad assured Brahimi he supported his effort, but it did not say whether he committed to a truce.

“The president said he is open to any sincere effort to find a political solution to the crisis on the basis of respecting Syrian sovereignty and rejecting foreign interference,” it said.

It added that Assad also stressed a political solution must be “based on the principle of halting terrorism, a commitment from the countries involved in supporting, arming and harboring terrorists in Syria to stop doing such acts.”

Syrian authorities blame the anti-government uprising on a foreign conspiracy and accuse Saudi Arabia and Qatar, along with the U.S, other Western countries and Turkey, of funding, training and arming the rebels, whom they describe as “terrorists.”

For months, Turkey served as headquarters for the leaders of the ragtag Free Syrian Army before the rebel group shifted its command to Syria. It also hosts many meetings of the Syrian National Council opposition group. Relations between the two countries, once close, have been deteriorating since the crisis began last year and Ankara became one of Assad’s harshest critics.

Brahimi said he was “hopeful that the holiday in Syria will be calm if not happy.” He said that he will return to the country afterward. “If we find that this calm is actually achieved during the holiday and continued, we will try to build on it,” he added.

Brahimi arrived in Damascus Friday after a tour of Middle East capitals to drum up support for the cease-fire. A range of countries including Iran, Iraq, Turkey and Germany have backed the idea.

Syrian government forces and rebels have both agreed in the past to internationally brokered cease-fires, only to then promptly violate them, and there is little indication that either side is willing to stop fighting now.

Elsewhere, in the northern city of Aleppo, a suicide bomber detonated his explosive-laden car in front of the French-Syrian Hospital at al-Zohour Street, causing material damage, but no casualties, SANA said.

Anti-regime activists say more than 33,000 people have been killed since the anti-Assad revolt started.