No real chance for an Eid truce in Syria, analysis 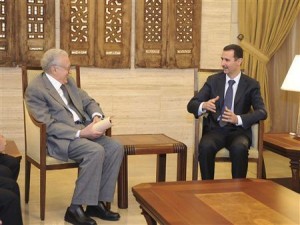 Lakhdar Brahimi, the UN and Arab League envoy to Syria, has visited several countries in the region – including Saudi Arabia, Turkey, Iran, Iraq, Egypt, Lebanon and Jordan – in a bid to gain new perspective on the deadly 20-month crisis in Syria, columnist Fayez Sara wrote in yesterday’s edition of the pan-Arab newspaper Asharq Al Awsat.

Mr Brahimi’s idea is to try to get the armed rebels and the Syrian government forces to agree on a ceasefire during Eid Al Adha. If that succeeds he will push for an extended truce.

“On the surface of it, it may look nice and simple, given that both the Syrian authorities and representatives of the opposition have expressed their readiness to observe a ceasefire during the Eid holidays,” the writer said.

“But the facts tell us that the situation is much more complex than that. Just consider the number of times efforts to enforce a similar ceasefire have failed before.”

The peace mission by Kofi Annan in Syria several months ago, and the Arab League observer mission before it, both failed in achieving that very goal.

The Syrian regime’s justification in failing to observe a ceasefire has always been the same: the “other side” broke the ceasefire first. And the vicious circle continues, the author noted.

What’s more, the Syrian regime has long set a “fundamental prerequisite” before taking part in negotiations with the opposition.

This situation makes the possibility of an Eid truce of a few days, let alone an extended ceasefire, very unlikely.

“The thing is, these practical and political difficulties standing in the way of a ceasefire are not secret to Mr Brahimi or to those on either side of the conflict,” the writer said. “But the ceasefire idea was pitched anyway, and more than that, it has received the support of many concerned parties.”

This is due to the fact that there is no better plan in the pipeline, the writer argued.

“There is a desire shared by the regional and international players to give Mr Brahimi and his efforts a chance … especially since none of the parties involved in attempts to resolve the Syrian crisis has an alternative plan.”

Plus, there is a secret hope shared by all sides that a ceasefire would allow everyone to breathe, and take stock of 20 months of turmoil.

Whatever the case, the impediments to a ceasefire – fuelled by each party’s mistrust of the other – remain very much present, making a truce a bit of a far-fetched idea, the writer said in conclusion.

Little has changed on the Moroccan diplomacy graph. The kingdom has always dedicated its efforts to putting its internal affairs in order, and so King Mohammed VI has given the top priority to domestic reforms, wrote Mohammed Lachheb in the pan-Arab newspaper Al Hayat.

“But everything comes at a price. Stability needs to be secured through well-balanced development and the enshrining of economic, social, political and cultural rights,” he added. Political unrest in the Arab world has had a negative effect on the kingdom’s economy.

Morocco has always been closely linked to the Gulf area, hence the Gulf Cooperation Council’s initiative last year to invite it to join its ranks came naturally.

Rabat didn’t join the GCC, but it did agree with the solid Arab body on a strategic partnership plan that has seen various Gulf States support its economic and security schemes amid a fast-changing Arab environment.

“Comprehensive security doesn’t hinge only on the role of military institutions, it is closely linked to economy, security, technological openness and the communication of knowledge,” said the writer.

The Moroccan monarch’s visit to the Gulf emphasises once again the bonds of a continuing strategic dialogue. Morocco has succeeding in providing the basic conditions for all-inclusive cooperation with the Gulf.

“The silliest incident I read about last week was about a teacher in Eygpt who cut a small amount of two schoolgirls’ hair as punishment for not wearing veils,” Fahmi Huwaidi wrote in the Qatari newspaper Al Sharq.

The response to the incident has varied between sharp rebukes for the teacher and alarm that Egypt’s civil state is in danger, the writer noted. He added that the incident has been much overplayed by some and trivialised by others.

Several news outlets have celebrated the disciplinary action against the teacher, who has been transferred to another school and docked one month’s salary.

“But no one asked why she did so, or what should be done to prevent any repeat of the incident in other schools,” he said. “In other words, we deem the sanctions to be sufficient.”

The writer said he did not want to downplay the teacher’s act, but thought it should be mulled over. “I am not against punishing the teacher, but I have reservations about seeing the administrative penalty as satisfactory in disciplining the teacher and deterring others,” he said.

The writer suggested utilising orthodoxy to the benefit of society, before extremism turns into a daunting problem.