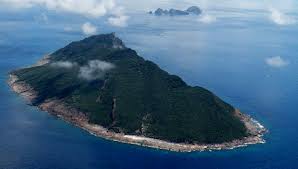 U.S. Secretary of State Hillary Clinton urged China and Japan on Thursday to let “cool heads” prevail in a festering dispute over a cluster of East China Sea islands, but hours later Chinese and Japanese diplomats traded barbs at the United Nations.

Clinton met Chinese Foreign Minister Yang Jiechi on the sidelines of this week’s U.N. General Assembly meeting in New York and said it was important to ratchet down the quarrel over the islands that has soured ties between Asia’s two largest economies, a senior State Department official said.

The uninhabited islets, whose nearby waters are thought to hold potentially rich natural gas reserves, are known as the Diaoyu islands in China and the Senkaku islands in Japan. They have been under Japan’s control since 1895.

“The secretary … again urged that cooler heads prevail, that Japan and China engage in dialogue to calm the waters,” the official told reporters.

“We believe that Japan and China have the resources, have the restraint, have the ability to work on this directly and take tensions down, and that is our message to both sides,” the official said.

Yang, however, used a portion of China’s annual address to the U.N. General Assembly on Thursday night to forcefully restate Beijing’s stance that the islands had belonged to China from ancient times and were seized in 1895 after Japan defeated the Qing Dynasty in a war.

Yang also condemned the Japanese government’s purchase of the islands earlier this month from their private owner, a step that sparked protests across China and prompted Beijing to curb bilateral trade and tourism.

“The moves taken by Japan are totally illegal and invalid,” he said of the purchase, which Tokyo says was done to ease the dispute by preventing the islands’ use by Japanese activists.

“They can in no way change the historical fact that Japan stole the Diaoyudao and affiliated islands and that China has sovereignty over them,” Yang told the General Assembly. Diaoyudao is what China calls the main island in the cluster.

Japan then exercised its right to reply in General Assembly debate, restating Tokyo’s position that no sovereignty dispute exists and that Japan began surveying the islands a decade before deciding to incorporate them in 1895, and there exists no evidence that the islands belonged to China.

“It has only been since the 1970s that the government of China and the Taiwanese authorities began making their assertions on territorial sovereignty over the Senkaku Islands,” said Kazuo Kodama, Japan’s deputy U.N. ambassador.

“Before then they did not express any objections,” he added.

Not to be outdone, China’s U.N. Ambassador Li Baodong accused the Japanese envoy of “resorting to spurious, fallacious arguments that defy all reason and logic.”

“The recent so-called purchase of the islands is nothing different than money laundering,” he said, accusing Tokyo of buying stolen property when it acquired the islands this month.

China has declared the islands “sacred territory,” and Taiwan has also asserted its own sovereignty over the area.

In hour-long talks on the sidelines of the United Nations on Tuesday, Japan’s Gemba urged China to exercise restraint over the dispute. Japanese diplomats described the meeting as “tense,” as Gemba endured a stern lecture from China’s Yang.

Yang called on Tokyo to handle the dispute through negotiation, and Japanese Chief Cabinet Secretary Osamu Fujimura said “it is necessary for both countries to maintain and strengthen bilateral communications and respond to the issue calmly and with a broad perspective in mind.”

Both China and Japan have sent patrol boats in a game of cat-and-mouse in the waters near the disputed islands, raising concerns that an unintended collision or other incident could escalate into a broader clash.

In a further sign of economic fallout from the dispute, Chinese buyers and Japanese sellers of refined copper have postponed agreement on terms for 2013 shipments.

Chinese and Japanese companies failed to reach a deal in talks this week, even though Japanese sellers were willing to cut price premiums by about 10 percent from last year, a Chinese executive familiar with the talks said.

The United States has said repeatedly it takes no position on the sovereignty dispute, but believes it is important for China and Japan to work out their differences peacefully. Washington has repeatedly confirmed, however, that the U.S.-Japan security treaty would apply to the islands in the event of military attack.

In her meeting with Yang, Clinton also touched on territorial disputes in the South China Sea that have set Beijing against a number of its Southeast Asian neighbors, including the Philippines, a close U.S. ally.

China has resisted calls by the United States and some Southeast Asian countries to agree on a multilateral framework to settle the disputes, preferring to engage with each of the other less powerful claimants individually.

The U.S. official said Clinton welcomed moves by China to restart informal meetings with members of the Association of Southeast Asian Nations, or ASEAN, most recently in Cambodia two weeks ago, as a sign of progress.

“We expect these meetings are going to continue in the lead-up to the East Asia Summit in November,” the official said. “This is precisely what the secretary has been advocating, that they restart a dialogue.”

Clinton met later with a delegation of ASEAN ministers, who were guardedly upbeat about China’s latest moves, a second U.S. official said.

“We are going to have to wait and see over the course of the next several weeks, but we have obviously encouraged the process to grow and deepen,” the official told reporters.