Plane crashes in Nepal capital, killing all 19 on board 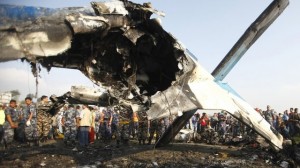 A plane heading for the Everest region has crashed in Nepal’s capital, killing all 19 people on board, including seven Britons, local officials say.

The plane, operated by Sita Air, came down minutes after take-off from Kathmandu. Officials said it crashed into a river bank near the airport and caught fire.

Sixteen passengers and three crew were on board the twin-engine prop plane.

The UK Foreign Office has confirmed Britons are among the dead.

Police and aviation officials said that seven Britons, five Chinese nationals and seven Nepali nationals were on the plane, including the three Nepalese crew.

The British Embassy in Kathmandu said the UK ambassador had gone to Tribhuvan University Teaching Hospital, where the bodies of those who died had been taken.

“We can confirm that there were British national fatalities. The embassy remains in contact with Nepalese authorities,” it said.

The plane was on its way to Lukla, the hub for trekking in the Everest region.

Police spokesman Binod Singh told the AFP news agency that “the pilots seem to have tried to land it safely on the banks of the river but unfortunately the plane caught fire”.

Images showed burning wreckage at the crash site and dozens of rescue and security personnel.

The cause of the crash is not yet known but conditions were said to be clear at the time.

In May, 15 people were killed when a plane crashed trying to land at an airport in the north of the country.

And in September 2011, 19 people were killed when a Buddha Air plane crashed during a flight to view Mount Everest.