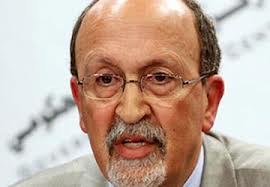 The Palestinian finance minister warned Sunday that the two-state solution is in jeopardy if the Palestinian Authority doesn’t get a major infusion of cash to alleviate its severe fiscal crisis.

Nabeel Kassis ( pictured right) said the authority needs money to function to prepare for statehood, noting that donors have not paid $300 million that they pledged to the Palestinians. Some $200 million is owed by the United States.

Kassis also urged the international community to go beyond expressions of support and take action to create “the political horizon” to quickly end the decades-old Israeli-Palestinian conflict. Negotiations have been frozen for more than three years, and there are no signs they will resume.

He spoke after a meeting of 27 donor nations, global financial institutions and representatives of the U.N., U.S., European Union and Russia, the so-called Quartet of Mideast peace mediators. Israel’s Deputy Foreign Minister Danny Ayalon also attended the high-level meeting hosted by the United Nations ahead of the General Assembly’s annual ministerial meeting which begins Tuesday.

Irit Ben-Abba, the deputy director-general for economic affairs in Israel’s Foreign Ministry, told reporters the government is “very concerned with the very severe fiscal situation of the Palestinian Authority at the moment.”

To help, she said, Israel has released advance payments of tax revenue, allowed the transfer of goods that will generate income for the Palestinian budget, and authorized international projects in the 60 percent of the West Bank that remain under full Israeli control.

“We call on the donor community to put more effort to assist the Palestinians at this stage and to encourage them to come back to the negotiating table,” she said.

Norway’s Foreign Minister Espen Barth Eide, who chairs the donor support group known as the Ad Hoc Liaison Committee, said the Palestinian’s economic situation “is dire and is getting worse.”

He said donors reconfirmed their previous assessment that the Palestinian Authority’s institutions are ready for statehood — a reaffirmation welcomed by Kassis.

The donors warned, however, that the economy was slowing after three years of high growth, improved living conditions and progress in improving the quality and functioning of Palestinian institutions, Eide said.

“During 2012, the Palestinian Authority is experiencing a severe fiscal crisis, due to shortfalls in domestic revenues, tax income, and donor contributions,” he said. “It may face a financing gap of at least $400 million at the end of the year.”

The committee called on donors to fulfill their outstanding pledges and increase their contributions for 2012.

Eide said that at Sunday’s meeting the U.S. representative confirmed Washington’s intention to meet its commitment.

The committee also called on donors to remain committed to the two-state solution and to continue assisting the Palestinian Authority to meet its financial requirements so it can “make the transition towards economic independence for a Palestinian state.”

Eide also stressed that political progress is essential to get the Palestinian economy “back on track.”