Employees of torched KFC outlet are set to lose their jobs 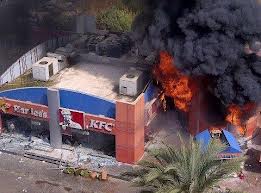 KFC Fast food outlet in Tripoli which was set on fire during the protests against the “Innocence of Muslims” film remains closed and its staff remain unemployed.

The employees demonstrated on Saturday because they may all lose their jobs.

According to unconfirmed reports the owners of the KFC franchise have informed the Ministry of Labor that they intend to dismiss all the 48 employees of the outlet because they plan to renovate the outlet and this could take about 18 months.

14 people have been arrested in the assault on the KFC, Hardee’s fast food outlets and the Serail during protests against the anti-Islam U.S. film last week, according to Tripoli police chief

Brig. Gen. Bassam al-Ayyoubi said the 14 suspects had set alight the fast food restaurants and tried to storm the Tripoli Serail in protests over the low-budget film “Innocence of Muslims” that has fanned global Muslim anger.

According to local reports the fast food outlet that was set on fire is not owned by an American company …. It is owned by a Muslim Arab investor from Kuwait and all its employees are Lebanese nationals.