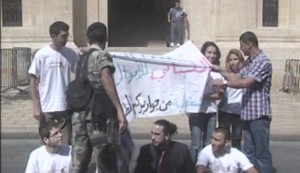 A group of young men and women protested on Monday outside parliament to demand the passage of the civil marriage law. But the security forces tried to stop them by force , detained them andtook them to the police station, according to a report by LBCI

One of the protesters told LBCI :

“We were shocked when the security forces attacked us. We were humiliated, beaten and sexually harassed with rifles.”

MP Ghassan Moukheiber personally interfered to release the detained protesters who vowed to pursue their case until civil marriage law is passed .