Charbel: A Bullet hit Aoun’s convoy but not in Sidon 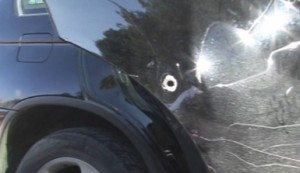 Lebanon Interior Minister Marwan Charbel said in remarks published on Monday that forensic investigators have revealed that a bullet did hit the right side of a car traveling in Free Patriotic Movement leader MP Michel Aoun’s convoy, but contrary to what Aoun said the car was not targeted in Sidon.

“The forensic investigators that inspected the car found out that it was hit by a bullet on the right-side door,” Charbel told Al-Mustaqbal newspaper.

However, Charbel said that ” contrary to what Aoun said the car was not targeted in Sidon.”

“The investigation did not reveal where, when or how the car was shot – the judicial investigation will answer all these questions – however security forces inspected the location that Aoun claimed the shooting took place and they did not find any evidence or any bullet,” Charbel added.

Charbel also said that no political party has been determined to be involved in the shooting.

“No political party is involved in the assassination attempt against Aoun,” Charbel said.

On Saturday evening, Aoun claimed he survived his fourth assassination attempt when his convoy came under fire in the southern city of Sidon while returning from a tour in Jezzine.