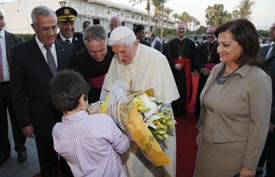 Pope Benedict XVI closed a three-day visit to Lebanon on Sunday with an impassioned plea for peace, reconciliation and interreligious harmony, the themes that have dominated his discourse here.

“I will appeal to all of you to be peacemakers, wherever you find yourselves,” Benedict told several hundred thousand worshipers in an open-air seaside Mass, the culminating event of his trip. “In a world where violence constantly leaves behind its grim trail of death and destruction, to serve justice and peace is urgently necessary for building a fraternal society, for building fellowship.”

The pope’s visit, embraced by this nation’s diverse religious and ethnic groups, provided a pointed contrast to the turmoil that has been roiling the region. The pontiff arrived as the war in neighboring Syria raged and protesters angered about an anti-Muslim film made in the United States took to the streets of numerous Arab nations.

The 85-year-old pope, frail but seeming to possess a reserve of energy, has been met by enthusiastic crowds and received a warm reception from Muslim and Christian leaders. More than one-third of Lebanon’s population is Christian, the highest such proportion in the region.

Lebanon, a nation of 4 million, has lived in a sometimes uneasy peace since 1990, when its devastating civil war finally came to an end after 15 years of sectarian bloodshed.

Much of downtown Beirut was shut to traffic Sunday and soldiers guarded intersections. Lebanese and Vatican flags festooned the streets and thousands of Lebanese and others walked beneath a blazing sun to the Mass. Organizers said about 350,000 attended the service along the Mediterranean Sea.

The pope again invoked the suffering in neighboring Syria and called on Arab and international leaders to take action to halt the violence there. However, he suggested no specific fixes for a crisis that has eluded all international efforts at mediation.

“I appeal to the Arab countries that, as brothers, they might propose workable solutions respecting the dignity, the rights and the religion of every human,” the pope said. “May God grant to your country, to Syria and the Middle East, the gift of peaceful hearts, the silencing of weapons and the cessation of all violence.”

Earlier in the trip, he had assailed the import of weapons to Syria as a “grave sin.” Arms have been flowing into Syria from nearby nations, including Lebanon.

While frequently condemning the violence in Syria, the pope chose his words carefully and never took sides in the conflict. Lebanon is fiercely divided about the conflict in Syria. The pope also did not mention the Islam-mocking film that sparked violent protests last week.

In his farewell address at Rafik Hariri International Airport — named after a former prime minister killed in a massive car bomb attack in Beirut in 2005 — the pope urged his hosts to practice religious tolerance. The Vatican fears an accelerated exodus of Arab Christians from the region as Islamist parties rise to power. Syria’s Christian minority could be especially vulnerable.

“I hope that Lebanon will continue to permit the plurality of religious traditions and not listen to the voices of those who wish to prevent it,” the pope said before boarding an airplane back to Rome.

“In these troubled times,” the pope said of his trip, “the Arab world and indeed the entire world will have seen Christians and Muslims united in celebrating peace.”

Photo: Pope Benedict XVI shown receiving bouquet of flowers at the Rafik Hariri International airport, Beirut Lebanon with President Michel Suleiman and the First Lady at the end of his historic 3-day visit to Lebanon. He ended his trip with an impassioned plea for peace, reconciliation and interreligious harmony, the themes that have dominated his entire Lebanon trip. September 16, 2012