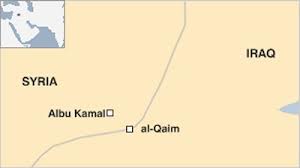 Syrian refugees squeeze against a closed gate at an Iraqi border post, reaching through its metal bars to clamour for water, and calling out to Iraqi cousins and brothers on the other side.

Yelling into their cellphones, more Syrians perch on top of the concrete walls that divide Iraq from Syria, waiting for Iraqis to unload trucks filled with boxes of cooking oil and bottled water and hoist them over the al Qaim checkpoint.

Many Shi’ite politicians took refuge in Syria during the rule of Saddam Hussein, and Assad, who is Alawite, an offshoot of Shi’ite Islam, is backed by Shi’ite Iran while Sunni power Saudi Arabia supports the rebels.

In Anbar, where tribal ties are strong, discontent over Baghdad’s stance on the Syrian crisis is growing. Many have already chosen their side.

“When you have cousins here, it is a matter just of luck whether they are Iraqi or Syrian,” said Emad Hammoud, a government worker in al Qaim. “In Syria, it’s a fight of a government against its people, and we are with the people.”

Al Qaim and its neighbouring Syrian counterpart Albu Kamal are on a strategic supply route for smugglers, gun-runners and now insurgents aiming to join the rebellion.

Just a few years ago the traffic went the other way: Sunni Islamist bombers crossed into Iraq to fight against the American occupation and refugees fled to Syria to avoid sectarian slaughter.

Though still wary of Islamist insurgents, Baghdad’s Shi’ite-led central government initially opened the border to Syria’s refugees after the conflict started 18 months ago.

But Albu Kamal has since been overrun by anti-Assad Free Syrian Army rebels and the number of refugees has grown, prompting authorities to lock al Qaim’s crossing. Army brigades now reinforce the frontier, marked by 2-metre metal fence.

Iraqi residents send food, water and medical supplies to pass over the gate at al Qaim, where around 200 to 300 Syrian refugees arrive daily seeking shelter or supplies from relatives before heading back home.

“This is not help from the state, this is from clerics and from the people,” said one local Iraqi government official at the crossing, who was not authorised by Baghdad to speak publicly about the refugees.

After Saddam fell in 2003, many members of his outlawed Baath party fled into Syria. Baghdad often criticised Damascus for sheltering al Qaeda, Sunni insurgents and former Baathists who used Syria as a haven to attack American troops in Iraq.

But Iraqi Prime Minister Nuri al-Maliki, who took refuge in Iran and Syria during Saddam’s era, has since developed a pragmatic relationship with Assad. Baghdad abstained in an Arab League vote to suspend Syria and resists calls for Arab sanctions, urging reforms instead.

Iraqi Foreign Minister Hoshiyar Zebari alluded to fears of what could follow if Assad is overthrown.

“The flow of refugees, the entrenchment of terrorist organisations, the veil of a fundamentalist regime, all this could impact us,” Zebari told Reuters. “We are trying to take a independent position. Based on our national interests… Things are not black and white.”

At tribal meetings across Anbar, talk is now of Syria’s crisis and how they can help their Sunni Syrian brethren.

Anbar’s tribes turned against al Qaeda to help U.S. forces in 2006. But since the rise of Iraq’s Shi’ite majority, many Sunnis say they are alienated. Local sheikhs feel sidelined by a prime minister who they say wants to consolidate Shi’ite power.

A fragile government amoung Sunni, Shi’ite and Kurdish parties has been mired in crisis as Sunnis accuse Maliki of reneging on power-sharing deals.

“Iraq will face a storm,” Sheikh Hatim Salaiman, chieftain of one of Anbar’s largest tribes told Reuters. “In a few months, Syria’s crisis will likely end. And what comes next will be difficult for Iraq.”

Al Qaim is already struggling with spillover from the fighting in Syria.

Beyond the frontier, the main border checkpoint on the Syrian side sits empty.

On one wall, the Free Syrian Army flag, with its three red stars, is painted over a portrait of Assad’s late father, Hafez. Bullet holes cratering the wall partially obliterate his face.

Gunshots that pockmark the concrete wall of another border post are evidence of the more regular clashes between Iraqi border troops and gunmen on the Syrian side.

For now, al Qaim’s mayor says, the border is closed for technical reasons, as local authorities wait to complete more camps with a capacity to deal with 10,000 refugees.

Outside the town, around 2,000 refugees who managed to cross the border before it was closed are housed in white tents. A similar number are put up with relatives or local residents.

The violence is growing. Three times now, Syrian rockets have landed on al Qaim, the most recently less than a fortnight ago, when three Katyushas hit a residential neighgbourhood, killing a small Iraqi girl and wounding some of her family.

It was unclear who fired them, the Syrian army or the rebels. But al Qaim residents know they will not be the last.

“I thought it was one of the Syrian planes we hear overhead. Then we heard the rocket coming at us,” said Firas Attallah, the girl’s father. “This is the price we pay, just for the help we are sending, for the food and medicine we send.”