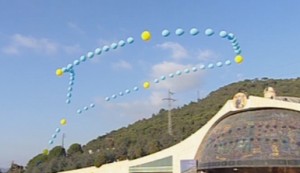 Pope Benedict XVI on Saturday implored young Christians not to emigrate from Lebanon, saying they were “meant to be protagonists” as the country moved forward, and urging them to forge closer bonds with Muslim youth.

“You are the future of this fine country and of the Middle East in general,” he said. “Seek to build it together.”

“You live in a region that witnessed the birth of Jesus Christ; you should continuously bear witness to Christ’s love in order to reach true freedom. Do not be afraid, you are in my heart and in the Church’s heart; open your hearts to Jesus Christ,” he said.

His comments on emigration, delivered at a festive youth rally attended by thousands of people, seemed intended to reach beyond Lebanon’s borders, at the kinds of fears that have led Christians to leave Iraq, Egypt and the Palestinian territories in large numbers.

“I am aware of the difficulties which you face daily, on account of instability and a lack of security,” he said. “Your sense of being alone and on the margins.”

He added, “Not even unemployment and uncertainty should lead you to taste the bitter sweetness of emigration, which involves an uprooting and a separation for the sake of an uncertain future.”

The start of Benedict’s first to the region since 2009 was initially overshadowed by the anti-American protests that surged through the region in reaction to an anti-Muslim video. The pope has not referred to the video directly, presumably to avoid stoking any further controversy at a delicate moment.

Benedict’s first appearance on Saturday was at the presidential palace in Beirut, where he spoke to an audience of diplomats and Lebanese politicians — including central players in this country’s long and bloody civil war. Referring to the region’s troubled politics as “interminable birth pangs,” he repeated his contention that Lebanon could serve as an example of coexistence.

As the sun set at the youth rally, the pope struck a parental note, cautioning young people to be wary of “parallel worlds” — including drugs, pornography and even social networks, which he said could lead to addiction.

Returning to the more grave problems facing the region, the pope greeted young people from Syria, paralyzed by an 18-month civil war, who he said were in attendance. “I want to say how much I admire your courage,” he said.

“Tell your families and friends back home that the pope has not forgotten you.”