Pope from Baabda calls for peace and unity 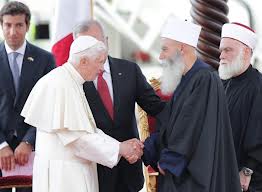 President Michel Suleiman, and First Lady, Wafaa Suleiman along with their grandsons , received on Saturday Pope Benedict XVI at the Baabda Presidential Palace.

Suleiman and the Pope exchanged souvenirs. Suleiman handed the Pope the first set of printed commemorative stamps, marking the Pope’s visit to Lebanon.

Later, the President accompanied the Pope to the Ambassadors’ Hall, where the pair held a private meeting.

The letter also welcomed the Pope’s visit to Lebanon, and the positive initiatives of the Apostolic Exhortation.

Qabbani expressed his regret toward what Christians had been through in the Middle east , saying “we have raised our voice denouncing and rejecting the attacks targeting Christians, which are often fabricated by local or foreign powers to cause sedition”, adding that such actions do not only harm the Christian – Muslim coexistence, but also contradict with the values of Islam.

The Mufti then explained that the reason why he hadn’t been among the receivers of the Pope at the airport was due to the conflict with prayer. time.

The Pope then took to the speakers podium, expressing thanks for “the warm reception”. “I ask God to bless this nation and region, I ask that peace be delivered to the people of Lebanon as Jesus Christ gave his disciples.” He then stressed on the importance of unity to achieve peace.

“Greatness is only granted to an individual by the power of the Lord, we must reflect greatness through our work. We must unify our efforts to broker peace,” he stressed.

“We are all responsible for protecting the sanctity of life. Family is the basis of all societies, and just like families, we must learn to coexist with one another, regardless of our ‘necessary’ differences,” he added.

The Lebanese people faced a lot of suffering and tragedies; I ask God to bless this multi-confessional country. Every person’s future depends on peace; peace only prevails when society is unified, when every person preserves his dignity. There are countries suffering from poverty, unemployment and terrorism leading to unacceptable pain for people who turn into victims. Every human being is a member of humanity; we must try to unite and spread the culture of peace and family values, through teaching children the meaning of peace at school and at home. The economic rationale imposes a constant burden but the loss of every human being is a loss for humanity as a whole. Only equality can face violations; we must cooperate to restore harmony among humans. [For the full speech please click on this link]

“Implementing peace will allow us to direct our attention to the less fortunate members of society. Evil comes only through choice, but the love of God will help us transcend this evil,” Benedict added. “Man can only lose upon choosing hatred over love,” he said.

Prior to the Papal’s speech , President Suleiman also delivered a speech in which he talked about the challenges facing Lebanon

“We face many challenges, including the implementation of UNSCR 1701, another main challenge is the prevention of Israeli attacks against Lebanon,” he added.

The Pope is set to have lunch with various Patriarchs and Bishops, Members of the Special Assembly of the Synod of Bishops for the Middle East, and the Papal Retinue, at the Dining Hall of the Armenian Catholic Patriarchate Bzommar. In the afternoon, he is expected to hold a meeting with the youth at the square across from the Maronite Patriarchate in Bkerke.

Early on Lebanese people lined up along the coastal road from Jounieh to Beirut to wave to the Pope as he passed through aboard the Pope Mobil. The crowd also hoisted pictures of the Pope Benedict and President Michel Suleiman and tossed flowers at the Sayyad intersection in Hazmieh. At the Baabda Presidential Palace thousands of Lebanese people, representing the nation’s diverse national fabric, assembled to welcome and greet Pope Bendict XVI.

The Pope had celebrated a mass at the Papal Embassy in Harissa, before heading for Baabda Palace where he was welcomed by Lebanese Folklore teams.