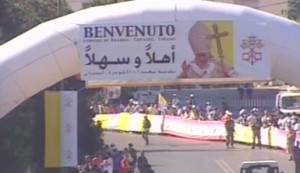 On the second day of his 3- day visit to Lebanon Pope Benedict XVI celebrated on Saturday a mass at the Papal Embassy in Harissa, before heading for the Presidential Palace in Baabda to meet with Lebanon’s top officials and religious leaders.

Lebanese people began gathering along the coastal road from Jounieh to welcome the Pope on his way to Baabda.

The Pope is expected to have lunch with Patriarchs and Bishops of Lebanon, Members of the Special Assembly of the Synod of Bishops for the Middle East, and the Papal Retinue at the Dining Hall of the Armenian Catholic Patriarchate Bzommar.

Saturday afternoon, he will hold a meeting with the youth at the square across from the Maronite Patriarchate in Bkirki.

On his first day in Lebanon, he signed the Post-Synodal Apostolic Exhortation of the Special Assembly for the Middle East of the Synod of Bishops, in the presence of the President of the Republic, Michel Suleiman, as well as senior political and religious officials.

Yesterday also he appealed to Christians, Jews and Muslims alike to “root out” religious fundamentalism, as deadly unrest sweeps the Middle East over a film mocking Islam. He also told the Christian minority in the Middle East not to fear for its future.