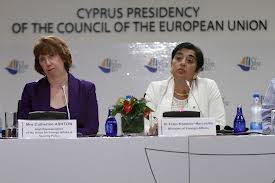 The European Union may impose new sanctions on the Syrian government of President Bashar al-Assad as soon as next month, EU diplomats said on Saturday.

“We need to go further in (targeting Syria’s) financial sector and commercial activities,” Reynders told Reuters after the meeting in a luxury resort in Cyprus – less than 400 kilometres (250 miles) from Damascus.

The agreement comes amid frustration that Assad is clinging to power despite a 17-month uprising against him and several rounds of EU sanctions. These include an arms embargo and travel bans and asset freezes on around 50 businesses and 150 people.

Ashton said the bloc would also boost its efforts to help refugees and other victims of the Syrian conflict and support Lakhdar Brahimi, the new U.N.-Arab League special envoy.

“Sanctions are under review,” Ashton told a news conference in Nicosia, the capital of Cyprus, after the meeting.

“Not only to consider whether more sanctions should be taken but to make sure that the enforcement of sanctions is done properly and any ability to evade them is dealt with.”

Some 20,000 people have been killed in the conflict, according to U.N. figures. Ashton cited a figure of 230,000 people who she said had fled the country, mostly to Turkey, Jordan, Iraq and Lebanon.

The EU executive on Friday said it would donate 50 million euros to help Syrian civilians, adding to the 69 million it has already contributed.

Swedish Foreign Minister Carl Bildt warned it would be tough to find areas of the economy where sanctions could have a strong impact.

“There is very little we can do,” Bildt told reporters.

One other option would be to create a buffer zone shielded from air strikes but the EU executive has said that would be impractical without a U.N. Security Council resolution authorising intervention. Russia and China have so far vetoed attempts to pass tough Security Council sanctions against Assad.

French Foreign Minister Laurent Fabius said a week ago that France and Turkey had identified areas in the north and south of Syria that had escaped Assad’s control, creating a chance for local communities to govern themselves without feeling they had to flee to neighbouring countries.

Other EU ministers were reluctant to support him for now.

“We need to go back to the capitals and see how we feel about it,” Polish Foreign Minister Radoslaw Sikorski said.

“Nobody knows what to do about Syria, other than try to convince the Syrian opposition to be better united,” he said.