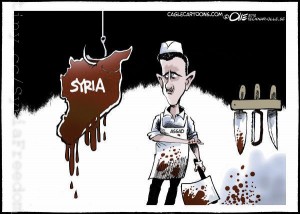 TURKISH Prime Minister Recep Tayyip Erdogan says Syria has become a “terrorist state” carrying out massacres of its own people.

“The regime in Syria has become a terrorist state,” Erdogan told a meeting of his ruling AKP party in Ankara on Wednesday. “Syria is not an ordinary country to us. We do not have the luxury to remain indifferent to what’s happening there.”

Turkey, once a strong ally of Syria, broke with Damascus after President Bashar al-Assad’s regime began cracking down on dissent, in a conflict which monitoring groups say has claimed more than 26,000 lives since March 2011.

Erdogan once again accused Damascus of committing “mass murders” against its own people and described Assad as “up to his neck in blood”.

He also chided the international community for remaining indifferent to the murder of Muslims by the Syrian regime.

Regardless of their ethnic origin or race, said Erdogan, Turkey will continue to embrace refugees fleeing the unrest just as it welcomed half a million Iraqi Kurds who fled after the 1991 Gulf War.

An enormous exodus of refugees from Syria has pressured Turkey to seek UN-backed safe zones for those displaced.

But Turkey’s appeal to the UN Security Council last week amid fears that it may soon be unable to cope with new arrivals fell on deaf ears.

The months-long divisions at the Security Council between Russia and China on the one hand, and Western powers on the other, have prevented any resolution of the crisis in Syria, despite the deteriorating humanitarian catastrophe.

Sources in Ankara have also noted that the United States now has no appetite for robust action on Syria before the presidential election in November.

Turkey is already home to more than 80,000 Syrian refugees registered in camps along the 910-kilometre border as well as some of the rebel leadership.

And thousands of refugees have been stuck on the Syrian side of the border since last week, waiting to be accommodated in new camps Turkey is building.

Despite the defeat at the UN Security Council, Turkish diplomatic sources had said Ankara would keep up its campaign for safe zones to protect the refugees inside Syria.

But in a televised interview last Friday, Erdogan admitted nothing could be done in this direction without a UN resolution, and warned that creating a buffer zone without a matching no-fly zone would be very risky.