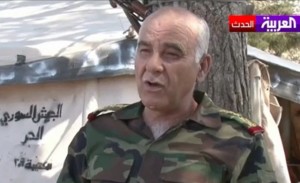 Unlike opposition groups outside Syria, the ones inside are becoming increasingly “strong and unified,” head of the opposition army, Brigadier General Mustafa Sheikh, told Al Arabiya in an interview aired on Tuesday.

The Free Syrian Army (FSA) head said that opposition groups outside Syria are politically divided and infiltrated by foreign agendas, making it hugely different than the opposition inside, which is increasingly “strong and unified” and has a “solid nationalistic vision.”

Embattled Syrian President Bashar al-Assad’s regime is attempting to spread sectarianism to stave off chances of its downfall, he said, but opposition forces were congregating together. Sectarianism is a challenge Syrians have to face, he added.

Assad has implied minorities within the country did not support the uprising that started March last year, claiming that the opposition was composed of “extremists and terrorists.”

The opposition inside is increasingly coming together, Brigadier Sheikh said, estimating four months, maximum, for Assad’s regime to fall.

On Monday, a FSA colonel named Fatih Fahd Hasoon announced the formation of the “Revolutionary Military Council” in the central city of Homs in a video uploaded to YouTube.

He said the newly formed council was to unify all FSA brigades in the central Syrian province.

Late August, Syrian opposition forces in the northern province of Aleppo also declared the formation of a “Revolutionary Transitional Council” to serve as an umbrella for all the ragtag opposition groups battling to bring down Assad’s regime.

Syrian opposition forces have long been criticized for being divisive and not unified, as Western nations have pressed Syrian opposition members to be prepared to be ready to fill the void if Assad’s regime collapses.

New U.N.-Arab League envoy Lakhdar Brahimi said Tuesday the death toll in Syria was “staggering” and destruction from its war “catastrophic” in his first comments to the U.N. General Assembly.

Brahimi said he would go to Damascus “in a few days” and that a united international stance on Syria was “indispensable and very urgent.”

The former Algerian foreign minister, who took up his post on Saturday, said the 18-month old war was “deteriorating steadily.”

“The death toll is staggering, the destruction is reaching catastrophic proportions and the suffering of the people is immense,” he added in his brief speech to the 193-member assembly.

“The future of Syria will be built by its people and none other,” the 78-year-old diplomat added. “The support of the international community is indispensable and very urgent. It will only be effective if all pull in the same direction.”