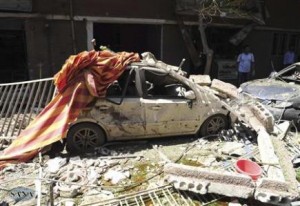 The Local Coordination Committees activist network said in a written statement that the explosion had caused a “large amount of damage and destruction of some homes.”

The blast went off in Jaramana, a mixed neighborhood of Christian and Druze residents also targeted in a bomb attack on Aug. 28 that killed at least 12 people and injured dozens more.

The Syrian government blamed rebels for the attack last week, which targeted a funeral, but activists and rebel fighters claimed the government had set up the blast to intimidate the minority groups in the neighborhood.

State television showed footage on Monday of several mangled cars near the explosion, along with the blackened and smoldering facade of a building close to the blast. The report called the incident a “terrorist attack.”

Col. Aref Hammoud, a spokesman for the rebel Free Syrian Army, said the group had nothing to do with the blast. “This regime is in its last days and they carried out this explosion to stir up sectarian anger and sectarian war,” he said. “They want to change the opinion of the West regarding the Syrian revolution.”

The attack on Monday was the latest in a series of bomb blasts that have hit neighborhoods across Damascus.

Two bombs blasts at a Syrian army base in central Damascus on Sunday injured four people, according to Syrian state media. And a car bomb exploded close to a Palestinian refugee camp in a southern suburb of Damascus on Saturday night, killing 15 people and injuring several others, the official Syrian Arab News Agency (SANA) reported.

The official Akhbariya channel showed footage of rubble spattered with blood at the site, along with a battered black sport utility vehicle with blown-out windows, and claimed “terrorists” had carried out the attack.

The explosion on Sunday took place in Abu Rummaneh, a well-guarded upscale area in central Damascus where the Ministry of Defense and other government buildings are located.

A truck bomb exploded in the same high-security zone on Aug. 15, injuring at least three people. Four senior government officials also were killed in a bomb blast in Damascus on July 18.

The explosions Sunday came at the end of a bloody week during which at least 1,600 people were killed, the highest death toll for a single week since the uprising began in March 2011, Patrick McCormick, a spokesman for the United Nations Children’s Fund (UNICEF) said at a news briefing in Geneva on Friday.

More than three hundred people were killed in the Damascus suburb of Darayya alone on Aug. 25, many of them executed, according to opposition groups. Video posted online after the mass killing showed dozens of bloody corpses spread out in the basement of a mosque in the area.

Heavy fighting across the country in the past month has killed at least 5,440 people, including 4,114 civilians, making August the deadliest month of the conflict, according to the Syrian Observatory for Human Rights, an opposition group based in Britain.

“This is a very high number. There are wars between countries that don’t have this many people killed,” said Rami Abdul Rahman, the director of the Observatory. “The regime is attacking more and there are clashes all over the country.”

Some of the opposition groups monitoring the death toll in Syria claim that at least 20,000 people have been killed since the uprising began last year.

A spokesman for the Free Syrian Army said it had carried out Sunday’s bombing as revenge for the attack by the military in Darayya. The spokesman, who goes by the nom de guerre Zain al Deen al Demashki, said rebel fighters had bribed soldiers at the army facility to plant the explosives, which had been rigged with timed detonators.

“Our target is to reply to the massacres in Darayya and attacks against civilians,” he said. “We wanted to attack the regime in its own home.”

Meanwhile, the Syrian military continued operations across the country Sunday with the killing of at least 35 people in the village of al Fan in the western province of Hama. The village was surrounded and nine people from a single family were killed in the attack, according to opposition groups, along with 10 other people who were taking shelter in a house that was destroyed.

“Regime forces were shooting at anything that moved, with bodies of casualties strewn throughout the agricultural fields,” an opposition group called the Hama Revolutionists Command Council said in a written release.

A report by the official Syrian Arab News Agency claimed the operation in al Fan had killed a number of “terrorists,” and pictures of the alleged confiscated weapons, approximately a half dozen machine guns, also were posted.