International or US intervention in Syria appears unlikely 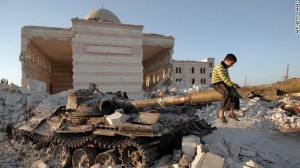 A sharp escalation in fighting and civilian deaths in Syria, pleas for help from rebel fighters and a tide of war-zone refugees are focusing American attention on a high-stakes Mideast conflict nine weeks before the U.S. presidential election.

Yet, as bad as the Syrian fighting looks, with an estimated 20,000 dead and hundreds of thousands of refugees in neighboring countries, intervention by the United States or international authorities appears remote.

Even a limited expansion of the minimal U.S. role is unlikely for the next several months and perhaps beyond, according to American and foreign officials.

“We could get dragged into this, no question, but we’re just not there yet,” said one of several senior U.S. officials who spoke on the condition of anonymity to discuss the complicated internal and diplomatic debates over Syria.

U.S. and other Western officials still predict that Syrian President Bashar al-Assad will eventually fall, but they said the 18-month-old conflict appears to be settling into a long war of attrition.

Against that bleak assessment, the Obama administration is resisting scattered calls in Europe and from the Free Syrian Army rebels to provide weapons and to establish an internationally protected humanitarian corridor or a buffer zone for displaced Syrians inside their country.

“The bottom line is that [such protected areas] would necessitate a no-fly zone,” a second administration official said. No humanitarian organization would enter Syria without guaranteed protection from air attacks and, the official said, “that would require taking out Syrian air defenses. This is a very slippery slope.”

This official and others insisted that all possibilities, including military intervention, remain on the table. “There’s not a thing . . . that we aren’t hotly debating,” he said. “There’s nothing that we haven’t turned up and down, looked at and scrubbed. We want to do more. But we’re putting that against what would be effective and in our interests.”

The rebels have taken territory and shown increasing military skill. But they are still no match for the heavy weapons of the Assad regime, and they are pleading for outside help.

In an interview broadcast Wednesday, Assad acknowledged the expanding scope of the war but predicted victory.

“We are fighting a regional and global war, so time is needed to win it,” he said on the pro-regime private TV station Dunya. “We are moving forward. The situation is practically better, but it has not been decided yet. That takes time.”

Variables for the U.S.

The administration, officials said, thinks that the rebels have made steady progress, using weapons taken from Syrian government forces and those provided and paid for by Persian Gulf states. But U.S. officials worry that any weapons given to shoot down Syrian planes or attack government tanks might fall into the hands of extremists within a rebel movement that has yet to unify around a workable and democratic plan for a transition after Assad’s fall.

“We worry that there is a higher degree of radical Islamist penetration in Syria, and we don’t want weapons falling into the wrong hands later,” said a third senior administration official involved in the planning for a post-Assad Syria.

At least 1,600 people have been killed in the past week, the highest death toll for a single week since the uprising began in March 2011, according to UNICEF.

Heavy fighting in the past month has killed at least 5,440 people, including 4,114 civilians, making August the deadliest month of the conflict, according to the Britain-based Syrian Observatory for Human Rights.

In recent days, rebel forces have been targeting government military facilities across the country. Two blasts at an army base in central Damascus injured four people Sunday, according to Syrian state media.

Despite the rising death toll, there is little U.S. appetite for another distant war or public pressure on President Obama to intervene. In a news conference last month, Obama said the Syrian government’s use of its chemical weapons stockpiles would constitute a “red line” that would change his calculus.

Republican presidential nominee Mitt Romney has criticized Obama as tentative on Syria, but he has not called for military intervention. And a senior Romney adviser last week rejected calls for a “no-fly zone.”

For now, U.S. efforts are focused on helping close ally Turkey, which is bearing the brunt of what the United Nations said are nearly 230,000 refugees who have fled Syria at a rapidly increasing rate.

Secretary of State Hillary Rodham Clinton traveled to Turkey last month to discuss Ankara’s call for a protected zone for the refugees inside Syria. Clinton promised additional U.S. humanitarian assistance, but she reiterated that military measures are unworkable or shortsighted, according to American and other officials who described the meetings on the standard diplomatic condition of anonymity.

Although France and others have voiced support for some form of military action, Britain and the bulk of NATO share the United States’ reluctance, diplomats said.

In a briefing to the U.N. Security Council on Thursday, Turkish Foreign Minister Ahmet Davutoglu proposed urgent measures. He asked that council diplomats visit camps for Syrian refugees in Turkey and other neighboring countries, and he sought the formation of a joint committee of Syria’s neighbors and U.N. refu­gee officials to deal with the issue.

Comparing the situation in Syria to the slaughter of civilians in Bosnia during the 1990s, Davutoglu said the United Nations is missing a “historic opportunity” to avert catastrophe.

Russia and China have repeatedly vetoed council resolutions calling for international action in Syria. Although Turkey is a NATO member, it has resisted asking the alliance for military assistance, partly out of concern that the Arab world would blame it for inviting outside powers into the region.

Russia and China have repeatedly vetoed council resolutions calling for international action in Syria. Although Turkey is a NATO member, it has resisted asking the alliance for military assistance, partly out of concern that the Arab world would blame it for inviting outside powers into the region.

“We think this is the only solution,” a Turkish official said of outside intervention, “but we are aware that if Turkey takes the lead in taking NATO into Syria, it will be remembered for decades. People will say our Turkish brothers did this.”

Syria has rejected refugee protection areas inside its borders, meaning that such zones would have to be enforced by foreign militaries, U.S. officials said.

Rebel-held areas near the northwestern Syrian city of Aleppo and the Turkish border — the likely sites of any safe zone or no-fly area — are within range of Syrian air defenses as far away as south of Damascus, the officials said. Syria also has mobile air defense units.

A limited zone, called “no-fly lite” by advocates, would be “like being half-pregnant,” said a U.S. official familiar with the discussions. “There’s no such thing.”

Although some have cited the NATO action in Libya last year as a model, Western officials say the situations are not comparable.

Libya’s unified opposition, favorable geography and limited defenses made intervention far less risky than it would be in Syria. In addition, the Libyan operation was endorsed by the United Nations, the Arab League and NATO, none of which has approved intervention in Syria. The Arab League is divided on the issue, and NATO would be reluctant to get involved, especially without U.S. support, even if Turkey asked for help.

Libya’s unified opposition, favorable geography and limited defenses made intervention far less risky than it would be in Syria. In addition, the Libyan operation was endorsed by the United Nations, the Arab League and NATO, none of which has approved intervention in Syria.

The role of regional powers has assumed greater significance because of the Security Council stalemate. Some of Syria’s neighbors were encouraged last week when Egyptian President ­Mohamed Morsi issued an unusually strong denunciation of Assad during a meeting of the Non-Aligned Movement in ­Assad-allied Iran.

Although he did not call for military intervention, Morsi said Syria’s neighbors had a duty to intercede.

“The bloodshed in Syria is our responsibility . . . and we have to know that the bloodshed cannot stop without effective interference from all of us,” the Reuters news agency quoted Morsi as saying.

As Syria’s foreign minister stormed out of the session, Morsi said other countries should show solidarity with a “political vision” for a democratic Syria.

Top photo: A boy plays on the gun of a destroyed Syrian army tank partially covered in the rubble of the destroyed Azaz mosques, north of the city of Aleppo, on Thursday, August 2.