Confident FSA is focusing on its brand, image

The revolution is being branded – a young Turkish graphic designer from the small border town of Kilis in Turkey has been commissioned by the Free Syrian Army to design its logo.

More accustomed to creating posters declaring “girls need to go to school” for the local municipality’s education programmes,” 28-year-old Sedat Akpinar was shocked to look up from his computer last week and find FSA Northern Border Commander Abu Hayder in his shop.

With designers and materials in short supply in his war-torn homeland, the commander had crossed over the border from Syria to Turkey and made his way to the nearest town, hoping to find someone who could help him create “an identifiable symbol” to be placed on cars, trucks, tanks, T-shirts, baseball caps and even bandanas.

With him, Mr Hayder had brought his “quality controller”: an FSA soldier with a background in design, now occupied as a full-time sniper. The recruit had a bullet wound in his arm over which he had tattooed a sword. “Designed by me!” he said proudly. 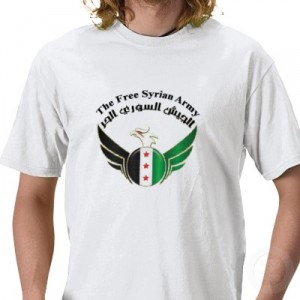 Mr Akpinar didn’t feel like arguing, so he quickly set about mocking up a design employing the green, white and black and three red stars of the Syrian flag superimposed with an eagle and an assault rifle “representing war.”

Speaking only Turkish, the designer then had to draft in one of his neighbours, a local smuggler who knew Arabic. Together, they were able to use his Coral Draw design program to build the Arabic characters for “Northern Storm Brigade,” his branch of the FSA, across the top of the insignia.

Once he had approved the final mock-up, the FSA Commander instructed Mr Akpinar to print 300 stickers with the new logo, each with a different number, to act as number plates for his army’s vehicles and thus make them easily identifiable. The printing had to be done on the spot: Mr Hayder was returning to Syria that day and wanted to take the new stickers with him. But he assured Mr Akpinar that he would return shortly to order black T-shirts and baseball caps embossed with the new logo. “If we take Aleppo we want all the fighters in our brigade to look the same when we enter the town and this would be a cheap, efficient way of producing a uniform,” he explained.

Even as the bullets fly, amidst the fiercest fighting the region has seen in generations, this very 21st century rebel group appears to understand the power of branding and the media. By building a unified image the FSA is seeking to present itself as a force with the trappings of statehood, capable of not only looking to the future with confidence, but also taking a central role in driving change at the heart of the Syrian government.

The man who controls the FSAs operations around the border with Turkey then handed the designer three hundred dollars and a flash drive full of footage and photographs of the conflict. These included interviews with senior FSA commanders at one of their bases; images of the regime’s tanks attacking the border town of Aziz; even gruesome footage allegedly showing a soldier from the regime’s forces being decapitated with a chain-saw while still alive.

“Sell that to CNN or the BBC and you can keep the profits,” the commander told his newly commissioned Turkish designer.