A Lebanese learns of mother’s slaying in Syria on TV 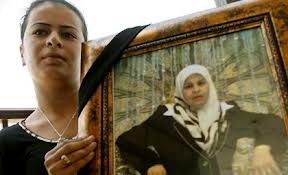 “She was buried before I could even say goodbye to her, my poor, dear mother,” says Manal who was shocked by footage of her mother’s body at a Syrian massacre while watching television in Lebanon.

On the weekend of August 25 and 26, the bodies of more than 330 people were discovered in the town of Daraya, near Damascus, according to the Syrian Observatory for Human Rights.

Government and rebel forces have blamed each other for the killings.

Manal’s slain mother, Siham Sallum, had lived in Daraya for six years with her Palestinian second husband. They had moved there in 2006 while a war between Israel and Hezbollah raged in neighbouring Lebanon.

“She told us life was becoming unbearable in Lebanon because of war, and that things were more secure in Syria,” said Katia, Sallum’s daughter-in-law. “How ironic. Now it’s Syria that is at war.”

“Suddenly, I saw a close-up on the face of a woman,” Manal lamented. “I recognised her face, her scarf, her clothes, and I cried: ‘Mama! That’s my mother!'”

Her face weary with pain, Manal said she had spoken to her 49-year-old mother every day, begging her to return home. Then on August 25, she tried to reach her, to no avail.

The army staged an assault on Daraya that lasted several days. The town is located near several rebel-held areas in Damascus province. Though the bodies were found after the offensive, it remains impossible to determine the exact circumstances of the victims’ deaths.

According to the Observatory, which relies on a network of doctors, lawyers and activists on the ground, the deaths were caused by “bombings, clashes and executions.”

Citing acquaintances in Daraya, Sallum’s son Mohammed said his mother was kidnapped by the rebel Free Syrian Army on Saturday alongside her husband and several other residents of the town.

The rebels, he said, promised they would set them free the next day.

“The rebels were getting ready for a prisoner exchange with the army, but the operation went wrong,” said Mohammed. “There was bombing and fighting, and the rebels killed their hostages.”

But according to Syrian opposition activists, the FSA was only holding three army officers — and no civilians — at the time.

“This is a lie propagated by the regime to justify what they did here,” an activist in Daraya who identified himself as Abu Ahmed told AFP via Skype.

“Many people had already been killed by the army’s bombings even before they launched their assault on the town,” he added.

Photo:Lebanese Manal Shirri holds a picture of her late mother Siham Sallum at her house in Khirbet Silem in southern Lebanon. Shirri learnt of mother’s slaying in Syria on TV (AFP/Mahmoud Zayyat)