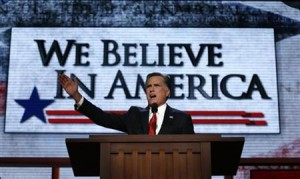 Republican Mitt Romney urged voters on Thursday to help him rebuild the U.S. economy and create millions of new jobs, asking them to overcome their disappointment in President Barack Obama and join him in restoring the promise of America.

In a high-stakes speech accepting the Republican presidential nomination, Romney said he would work to unify a divided country that believed Obama’s lofty campaign promises but had lost hope they would be fulfilled.

“What is needed in our country today is not complicated or profound. It doesn’t take a special government commission to tell us what America needs. What America needs is jobs. Lots of jobs,” the former Massachusetts governor told a cheering crowd on the final night of the Republican National Convention in Tampa.

The speech was somewhat overshadowed by a bizarre performance on stage by Hollywood star Clint Eastwood, who addressed an imaginary Obama in an empty chair.

A surprise guest who appeared shortly before Romney during TV prime time, Eastwood made a rambling speech that puzzled viewers and interrupted a carefully crafted evening that told the story of Romney’s life and why he should lead the country.

Earlier in the evening, the convention heard from a series of Romney’s friends and relatives who painted a picture of a humane, compassionate man – part of a three-day effort to humanize a candidate often accused of being cold and formal.

Romney’s speech, which launches a two-month dash to the November 6 election, was seen by tens of millions of television viewers and gave some their first extended look at the multimillionaire ex-businessman.

It could be a defining moment for a candidate who has struggled to win over conservatives and connect with independent voters in a campaign against Obama that has been dominated by the sluggish economy and lingering high unemployment.

Romney, who says his experience as a business executive is the cure for the ailing economy, promised to create 12 million jobs. He drew a sharp comparison between the promise of Obama’s election in 2008 and the results of the last four years.

“Today the time has come for us to put the disappointments of the last four years behind us, to put aside the divisiveness and the recriminations,” he said. “Now is the time to restore the promise of America.”

He said Americans wanted to believe in Obama but had suffered from his failures of leadership.

“Hope and change had a powerful appeal. But tonight I’d ask a simple question: If you felt that excitement when you voted for Barack Obama, shouldn’t you feel that way now that he’s President Obama?”

“You know there’s something wrong with the kind of job he’s done as president when the best feeling you had, was the day you voted for him.

Democrats alternately portray Romney, 65, as a heartless corporate raider, wealthy elitist, tax evader and policy flip-flopper who should not be trusted with the keys to the White House.

To counter that image, the convention heard emotional testimonials about Romney’s work as a Mormon leader that made many convention delegates in the Tampa Bay Times Forum cry.

One couple talked of how Romney befriended and comforted their dying teenage son. A woman, Pam Finlayson, recalled how he prayed with her in hospital when her premature baby daughter was close to death.

“His eyes filled with tears and he reached down tenderly and stroked her tiny back,” Finlayson said.

Romney also tried to show a softer side, describing his parents and family and defending his work at Bain Capital, the private equity company that critics have accused of raiding companies and cutting jobs.

“That business we started with 10 people has now grown into a great American success story. Some of the companies we helped start are names you know,” he said, naming Staples and Sports Authority.

The Obama campaign said Romney failed to lay out a path for America.

Romney’s speech concluded the convention, which was cut short by a day because of a storm threat but featured stirring speeches by Romney’s wife, Ann, and his vice presidential running mate, Paul Ryan.

It included a parade of new Republican faces, including several women and Hispanic speakers hoping to broaden the Republicans’ appeal to voting blocs that heavily backed Obama in 2008.

It seemed to give Romney a boost. The latest Reuters/Ipsos online poll showed him moving into a narrow lead over Obama — 44 percent to 42 percent among likely voters. The Republican had entered the week trailing Obama by four percentage points.

Obama gets his turn at the Democratic nominating convention next week in Charlotte, North Carolina, giving him an opportunity to quickly bounce back.

Romney was introduced by Florida Senator Marco Rubio, a Cuban-American with Hispanic appeal who has become a rising Republican star and a favorite of Tea Party conservatives. Rubio had the crowd roaring as he criticized Obama.

“This election is not simply a choice between a Democrat and a Republican,” he said. “It’s a choice about what kind of country we want America to be.”

The nomination caps a political comeback for Romney, who lost the Republican race to Senator John McCain in 2008 but immediately began laying plans for a bid this year. He was tested frequently in a long and bitter primary campaign by a series of conservative alternatives from Newt Gingrich to Rick Santorum.

Despite struggling to win the hearts of conservatives, he eventually outlasted all of them, helped by huge spending on negative ads by “Super PAC” groups that fund campaign advertising to support him.