BEIRUT , Lebanon – As spillover from the civil war in Syria increasingly threatens Lebanon’s stability, the Lebanese military remains weak, hindered by a lack of political support to confront security issues, low morale and a struggle against the pull of volatile sectarian politics.

The Lebanese Army is confined to “trying to take the least worst set of decisions in order to stabilize the country — and with minimal support,” said Aram Nerguizian, a visiting fellow at the Center for Strategic and International Studies in Washington and an expert on the Lebanese armed forces.

In a country where, for many, loyalties to sectarian political parties and leaders usually supplant those to the state, the Lebanese military stands out as a rare, respected institution. That respect derives from its inclusive nature and the fact that it represents all of Lebanon’s often-divided groups.

In a country where, for many, loyalties to sectarian political parties and leaders usually supplant those to the state, the Lebanese military stands out as a rare, respected institution. That respect derives from its inclusive nature and the fact that it represents all of Lebanon’s often-divided groups.

Yet while the military’s cross-sectarian makeup “gives you stability,” this also introduces “a high degree of vulnerability,” said Elias Hanna, a retired brigadier general.

Recent involvement by the Lebanese Army in sectarian clashes in northern Lebanon has highlighted the military’s ineffectiveness as well as the dangers posed to the force by the fragility of its cross-sectarian organization.

Last week, fighting between rival Sunni and Alawite militias returned to the streets of Tripoli, Lebanon’s second-largest city. The violence — between supporters of Syria’s rebels and Lebanese co-religionists of that country’s president, Bashar al-Assad, who are loyal to the Damascus regime — lasted nearly a week and resulted in the deaths of 17. 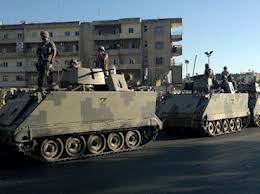 Last Friday, Lebanese Army armored personnel carriers stationed on Syria Street in Tripoli could be observed opening fire on Jebel Mohsen, the Alawite neighborhood, with .50-caliber machine guns. Within sight of the vehicles, Sunni gunmen cheered the soldiers on.

Other Sunni fighters used the army’s involvement as cover fire to advance, and throughout the exchange snipers continued firing at Jebel Mohsen from concealed positions in neighboring buildings.

During the recurring bouts of violence in Tripoli, the Lebanese government and army have repeatedly emphasized that the role of the military in the city is to arrest gunmen involved in the fighting, regardless of which side they are on.

Elements of the mechanized infantry brigade stationed on Syria Street last week paid no attention to the militia activity occurring directly around them, despite the public orders.

Some Sunni fighters said they had even bought ammunition at prices below the going black market rate from a sympathetic soldier stationed on the street.

In Lebanon, sectarianism is hard to escape for many. The individuals who make up the rank and file of the Lebanese armed forces — and those in leadership positions — are mostly unable to stand back from the country’s charged atmosphere of sectarian politics, despite the military’s mandated neutral position.

In Lebanon, sectarianism is hard to escape for many. The individuals who make up the rank and file of the Lebanese armed forces — and those in leadership positions — are mostly unable to stand back from the country’s charged atmosphere of sectarian politics, despite the military’s mandated neutral position.

Realizing this, the military often chooses not to intervene in intra-Lebanese conflicts, for fear that orders will not be followed, that the military’s action will be viewed as politicized or that the ranks will dissolve.

“Every individual soldier, noncommissioned officer and officer can’t negate the fact that they belong to the community or that they come from a specific village or town,” Mr. Nerguizian said.

Ordering soldiers to conduct an operation in an area where their sect is present can pose problems.

“When you go into an area that is Shia and a third of this unit is Shia, it’s difficult for this unit to fight their people,” General Hanna said. “And it goes for every sect.”

The only major military operation in recent times that the Lebanese military has successfully started came in 2007 when it confronted Fatah al-Islam, an extremist Islamist organization. The battle with the group, which was largely made up of foreigners, received the public and political support that is often lacking when the military most needs it.

In May 2008, when fighting between March 8 bloc, led by Hezbollah, and the anti-Syria March 14 bloc threatened to return Lebanon to civil war, the military watched from the sidelines.

The chronic and inherent weakness of the Lebanese government has meant that loyalty to the state above all else is rare. In terms of the stability of the military, this is not a promising sign.

General Hanna said of the average Lebanese soldier that if “tension rises up to a level where you have to choose between your sect and the army, I think they will go to the sect.”

There has been spillover from the conflict in Syria in the form of a surge in violence in Tripoli, increasingly heated political rhetoric between Lebanese supporters and detractors of the Syrian regime, the arrest of a former information minister accused of plotting to destabilize Lebanon under orders from Damascus, and the threat of a return to tit-for-tat sectarian kidnappings, but the violence that some have expected has not yet arrived in Lebanon.

If such a conflict does materialize, the implications for the military could be severe.

In such a situation, “there will come a time where if you don’t have a strong, coherent Lebanese armed forces to play a critical national security and stabilization role, the decay into broader patterns of civil violence might be very difficult to forestall,” Mr. Nerguizian said.

“I am afraid to see the Lebanese Army lose their unity,” said Amin Hotait, another retired general, speaking of what could happen if Lebanon entered a deeper conflict.

Much of the reason that the Lebanese Army has not been able to intervene successfully in security issues in the country stems from a lack of political consensus about the military’s role. While some in the military may want to separate the institution from the sectarian politics of the country, this task is difficult, especially when tensions run high.

The country’s perpetually feuding political blocs often try to exert pressure on the military, and at times public support or hostility to the military is used as a political tool, with the various blocs either claiming the army as their protector or accusing the force of working to further the interests of their opponents.

“As the situation in the country decays, it’s sort of like political and sectarian radiation: You can only defend yourself against it for so long,” Mr. Nerguizian said.

General Hotait played down the role of sectarian politics on the military’s command and rejected the notion that Lebanon’s political parties had at times sought to use the military as a political tool.

Despite this, and while General Hotait denies any political affiliations himself, a picture of him shaking hands with Mr. Assad prominently displayed in his living room, a nearby plaque depicting a Hezbollah logo and his repeated use of the word “terrorists” to describe the Free Syrian Army hinted that he is most likely a supporter of the Damascus regime’s friends in Lebanon.