The Bashar al-Assad I know

by yalibnan
3271
Expectations were a serious problem for Syrian President Bashar al-Assad from the very beginning of his rise to power in 2000 following the death of his father, Hafiz al-Assad.
Share: 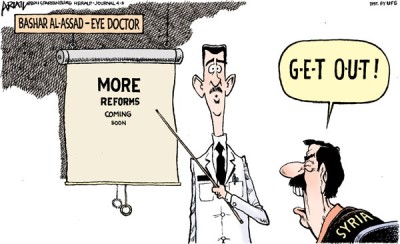 High expectations are both a blessing and a curse. They are the former in that usually something worthwhile about someone has raised the expectations in the first place. They are the latter when someone fails to meet those expectations. Heightened, maybe even unwarranted, expectations were a serious problem for Syrian President Bashar al-Assad from the very beginning of his rise to power in 2000 following the death of his father, Hafiz al-Assad.

As I noted in Middle East Policy Council a couple of years back, I half jokingly told Bashar the first time we met in 2004 that I thought he had made a mistake in letting the media know that he enjoyed Phil Collins’ music. This anecdote fed into an emerging narrative of the relatively unknown al-Assad that he was a pro-West modernizer who was very different from his father. Indeed, Bashar was also the chairman of the Syrian Computer Society and was actually a bit of a geek himself.

Maybe Bashar is partially to blame for these increased expectations, dedicating himself as he did to the Damascus spring, which saw a period of unprecedented political openness. However, this was soon followed by political repression, and the misplaced profiling of the Syrian president in the West clearly missed the point. Indeed, much of the disappointment in Bashar in the West stems from the gap in understanding between the Syrian leadership and much of the rest of the world. When al-Assad delivered his first address to the country on March 30, 2011 in reaction to the growing protests in Syria, he singled out armed terrorist gangs and conspirators for the unrest. Indeed, he still does.

And while many outside Syria dismissed this apparent misdirection, many Syrians, including al-Assad, are actually quick to believe such views. Their perception of the nature of threat, from a dangerous part of the world, is vastly different from what we see outside of Syria. And as I wrote in Foreign Policy several months into the uprising last year, it is this gap in perceptions that is at the root of the impasse between what the international community has demanded of the Syrian regime and what al-Assad has actually done to end the violence.

Based on experience, al-Assad does not trust the West nor its instruments of diplomacy such as the United Nations or the Arab League, the latter dominated, in his view, by pro-U.S. allies Saudi Arabia and Qatar. He is operating from a reality that is quite different from that which much of the rest of world envisions. Some of this is simply the result of different spins on the exact same events by the Western-based press and the Syrian government. Some of it is the alternate reality that typically is constructed around authoritarian leaders by sycophants and access-seekers who surround the ruler. But whatever the case may be, all that matters is that he believes his reality to be true – and right.

But it isn’t only a matter of different realities. Somewhere along the road al-Assad lost his way. The arrogance of authoritarianism will do that; indeed, power is an aphrodisiac. Either he convinced himself or was convinced by his supporters that his well-being was synonymous with the well-being of the country, and that what he was doing in terms of violently putting down protests and not meeting the demands for change were both necessary and correct. The Syrian government’s crackdown was a push button, convulsive response to domestic threat. It is business as usual. It is not as though al-Assad does not control the security forces. It is that this has been the way Syria works under the al-Assads. They reach into their historical pocket and pull out what worked for them in the past, and what they found was much closer to Hama in 1982 than anything else.

Bashar was not willing to reduce the tremendous amount of leeway he has given the security forces to deal with threats. As I note in the Fall of the House of Assad, this empowered thuggish security forces who only know one way to deal with threats. Bashar has gone along with this instead of understanding the new circumstances created by the Arab Spring. In addition, the regimes of Hafiz and Bashar al-Assad simply do not make concessions from a perceived position of weakness. “They will only make concessions from a perceived position of strength, so cracking down hard on demonstrators while offering political reforms are two sides of the same coin. This is the Syrian way under the al-Assads.”

I saw personally how Bashar al-Assad grew more comfortable as president over the years I met him. Maybe too comfortable. In May 2007, amid Bashar’s re-election in a referendum to another seven-year term, I noticed something in him that I had not detected before: self-satisfaction, even arrogance. Maybe this is inevitable in such an authoritarian state. However, when I first met him, Bashar was unpretentious and even self-deprecating.

The election of 2007 generated tremendous mass support for al-Assad, even though he was the only candidate in the referendum. The pomp and pageantry in Damascus belied his eschewing of a personality cult up until that time. It seemed that Bashar had finally been able to tap into that aquifer of support he had built up, and for the first time he was able to experience it in grand style.

It was a cathartic experience for him. In a personal meeting with him on “election day,” he seemed genuinely touched by the celebrations, and more importantly, he absorbed it fully. This is the first time I felt that Bashar began to believe the press and propaganda, that to lead the country was his destiny. He had drunk the Kool-Aid of power. He was going to be president for life. His view of his position had certainly evolved since the early years of his rule. Given the dilapidated and corrupt system he inherited – and then perpetuated – perhaps he was destined to disappoint. Unfortunately, that disappointment became manifest for many with a brutal crackdown that has killed thousands, significantly degraded his country, and made his rule untenable.

*David W. Lesch is professor of Middle East History at Trinity University in San Antonio, Texas. He is the author of many books, among them Syria: The Fall of the House of Assad, released this month from Yale University Press. The views expressed are his own.