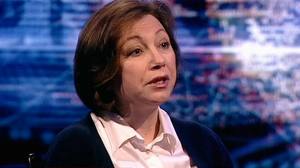 Bassma Kodmani, a prominent voice of the Syrian National Council ( SNC) , resigned from the main political opposition body to President Bashar al-Assad, citing disappointment in the group’s failure to work together more than 17 months after the uprising began.

“I decided to leave the council because of a difference of views over how to move forward and because thought I could be more productive working on the outside,” Kodmani, a Paris-based academic turned revolutionary, said today in a telephone interview.

Without going into details, the former chief spokeswoman for the SNC said that in “general terms, I’ve been disappointed with how the council has worked on several levels.” She said she will work with other groups, mainly in humanitarian relief.

Kodmani said her resignation was unrelated to France’s signal yesterday that it was prepared to confer legitimacy on the SNC, a political umbrella for anti-government factions that includes the Muslim Brotherhood.

French President Francois Hollande, who came to power in May as the Syria conflict raged, called for the opposition to form a provisional government, echoing similar overtures made by his predecessor Nicolas Sarkozy on Libya last year.

The pullback has been accompanied by a surge in fighting, with battles engulfing areas of the country’s two biggest cities, Damascus and Aleppo.

At least 41 people were killed across Syria today, 18 of them in Idlib, and seven in the suburbs of Damascus, the Local Coordination Committees in Syria said in an e-mail. The day after the UN monitors left, Aug. 25, was the bloodiest since the uprising began, with 440 people reported dead by the LCC, an activist group. The death tolls couldn’t be verified.

The Syrian uprising, which began as a peaceful protest movement in March 2011, has defied regional and international efforts to resolve it. More than 23,000 lives have been lost during the unrest, the U.K.-based Syrian Observatory for Human Rights estimates.