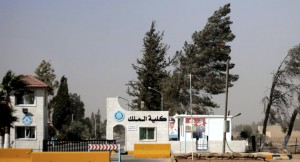 MAFRAQ, Jordan – In an isolated stretch of Jordanian desert, a heavily guarded, secret compound houses 1,200 senior police and army officers who defected from nearby Syria.

The men live in trailers with fans but no air conditioning, surrounded by barbed wire, and they pass their days browsing the Internet and watching TV for news of Syria’s civil war, longing to join the fight — but they are largely unable to leave.

The Jordanian military runs the camp near a site formerly used by the U.S. to train some its forces for the war in Iraq, and the defectors are debriefed by intelligence agents. Access to them is tightly restricted for their own protection. They are even separated from their families, who live outside the camp near the northern border city of Mafraq but can get special police permits to visit.

The defectors in the camp are allowed to communicate with the rebel Free Syrian Army in Jordan and abroad, both in person and through telephone and Internet communications, but do not have what is considered valuable intelligence, according to Jordanian security officials who spoke on condition of anonymity because they are not allowed to make press statements.

The facility is a sign of Jordan’s growing role as a quiet supporter of Syria’s opposition. But at the same time, Jordan wants to avoid aggravating tensions with its more powerful northern neighbor, fearing that President Bashar Assad may remain in power.

There are more than 160,000 Syrian refugees in Jordan, and their number is increasing by the thousands every day. About 8,000 live in a newly set up camp on the border, while the rest are scattered across Jordan.

Maintaining control over the refugees poses a security threat to the small, tightly controlled kingdom. Jordanian security officials and refugees have said there were pro-Assad “sleeper cells” in Jordan that could act against the refugees.

Jordan has rejected several requests by the Assad government for the extradition of the defectors and has allowed entry to hundreds of Syrian rebels who move freely around the country. It also has helped the refugees by giving them medical treatment.

It is not clear if former Syrian Prime Minister Riad Hijab, the most prominent defector to flee to Jordan, is housed in the desert facility or one elsewhere. Hijab fled under a plan coordinated between the Amman government and the Free Syrian Army.

The Associated Press asked to visit the desert facility but was denied access. However, the AP spoke to two of the camp residents who described the conditions there.

Khaldoun, a 47-year-old former Syrian army brigadier, said there were dozens of trailers housing up to seven men each, with fans stirring the desert air. Armed Jordanian soldiers guard the compound around the clock, he said.

The men spend their days exercising and playing backgammon and chess, and the Jordanians provide them with access to the Internet, TVs, cellphones and computers, said Khaldoun, who insisted on being identified by his first name only, citing concern for the safety of relatives in Syria.

“It’s good to be here, away from the tension and war, but this is not what I had hoped for,” he told the AP.

“I wanted to be part of the rebel movement fighting to liberate Syria,” Khaldoun added. He said he spends most of his day watching TV, exchanging gossip, or browsing the Internet for news on the violence back home.

“It’s difficult to watch the war in Syria on TV and the Internet and not be part of it,” he added.

Khaldoun defected to Jordan in January at the height of the Assad regime’s crackdown on his hometown, the central city of Homs, which became the hub of the uprising that began in March 2011. Hailing from a prominent Sunni Muslim family, he served in the 7th Armored Division for 23 years until his escape.

The security defectors range in rank from corporal to general — but they said their access to state and military information was limited because as Sunnis they were kept in the dark by the inner circle of the ruling Alawite minority — a Shiite Muslim offshoot — that surrounds Assad.

The Jordanian security officials said access to the defectors was restricted because of concerns that pro-Assad elements could try to attack them.

A series of attacks on Syrians in Jordan has led refugees and Jordanian officials to believe agents of the Assad regime are operating in the kingdom on a campaign to hunt down opponents and intimidate those who have fled. Jordan has also arrested supposed defectors on suspicion that they were spying on Syrian refugees and dissidents.

The camp housing the defectors is near Jordan’s largest air force base, which had been used as a training facility for U.S. forces in the past two decades during and after the wars in neighboring Iraq.

Jordanian government officials have refused to comment about the desert camp, saying that they have little information about the defectors.

The camp’s refugees fled in batches since the uprising began, with most of them smuggled through a northern border fence by the Free Syrian Army and later interrogated by Jordanian intelligence to verify their identities and the authenticity of their stories, one of the Jordanian security officials said.

The defectors are between 40 and 60 years old, and some have chronic ailments such as high blood pressure, diabetes and back problems that prevented them from being in the frontline in Syria or joining the rebels, the officials said.

A handful of other senior military and police defectors are kept at a secret location elsewhere, one of the security officials said, including Syrian air force Col. Hassan Hammadeh, who flew his MiG-21 to Jordan on June 21.

Most of the defectors were seen as “small fish” who for the most part did not provide actionable intelligence, according to the Jordanian security officials and a Jordan-based Western diplomat who spoke on condition of anonymity because identifying him would compromise his ability to gather information on Syria.

Still, one of the defectors at the desert compound said that as a colonel in the military, he held such a high rank that the Assad regime would go to great lengths to strike back at him.

“They would destroy a whole suburb if they think one of us is there,” said the colonel, who identified himself only as Rahal, citing fears of retribution against relatives still in Syria.

“This is why I had to get out of Syria,” he added.

Rahal said he and 37 other officers were jailed shortly after the start of the uprising, but a number of them were given amnesty and released in May. The regime told him to report to work but merely shuffled him from one office to another, he said.

“I had no real job, just drinking tea and watching TV,” the 45-year-old said.

He said he decided to defect when the security forces “decided to militarize the conflict in order to end the crisis.”

Rahal predicted the Free Syrian Army would ultimately get the weapons it needs to finish off Assad.

“The Free Syrian Army is like a group of birds on a tree. If the regime tries to shoot one of the birds, the group flies off to another tree. The regime will never get them all,” he said.

Photo: Associated Press – FILE – In this Thursday, June 21, 2012 file photo, the entrance of King Hussein Air Base in Mafraq, Jordan, 45 miles (70 kilometers) north of Amman, Jordan. In an isolated stretch of Jordanian desert not far from Syria, a heavily guarded, secretive compound houses 1,200 senior police and army officers who defected from the neighboring country. Though their movements are limited, they are protected in an arrangement that underscores Jordan’s growing role as a quiet supporter of Syria’s opposition. (AP Photo, File)