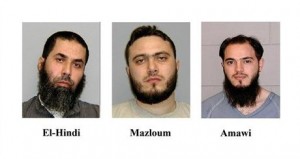 A federal appeals court on Thursday upheld the convictions and sentences of three men including a Lebanese found guilty in Ohio of recruiting and training terrorists to kill U.S. soldiers in Iraq.

A three-judge panel of the 6th U.S. Circuit Court of Appeals in Cincinnati turned down 10 issues on appeal in the Toledo case involving Mohammad Amawi, Marwan El-Hindi and Wassim Mazloum.

The men were found guilty in 2009 of conspiring to kill or maim people outside the United States, including military personnel. Amawi and El-Hindi also were convicted of distributing information regarding explosives to terrorists.

The FBI said the men met in Toledo about eight years ago and began plotting and training to help insurgents in Iraq. Defense attorneys argued that the men were set up by a paid undercover FBI informant.

Amawi, El-Hindi and Mazloum were appealing on a number of issues, including a lower court’s decision that turned down their request for an acquittal and dismissal of their indictment based on the informant’s conduct, which they said included creating a “terrorist cell” for the men.

Prosecutors were appealing the men’s sentences, arguing that they should have gotten life in prison.

Amawi was sentenced to 20 years in prison, El-Hindi got 12 years and Mazloum received an eight-year sentence.

The 6th Circuit turned down all the appeals, first upholding U.S. District Judge James Carr’s reasoning when he said that while the informant played a major role in the case, his actions did not amount to entrapment.

The court also rejected that the men’s sentences were too low, saying Carr’s reasoning for sparing them from life sentences was sound and reasonable based on the men’s lack of criminal histories and the fact that there was no evidence that any of them had killed anyone.

At trial, prosecutors hinged their case on the informant, a former Army Special Forces soldier who recorded the men for about two years beginning in 2004 while they talked about training in explosives, guns and sniper tactics.

The informant, Darren Griffin, testified that after infiltrating a mosque to identify potential terrorists, El-Hindi approached him about kidnapping Israeli soldiers. He said Amawi asked him to help train two recruits from Chicago for holy war, and that he taught Amawi and Mazloum how to shoot guns.

Amawi and El-Hindi are U.S. citizens. Mazloum came to the U.S. legally from Lebanon. El-Hindi was born in Jordan. Amawi was born in the U.S. but also has Jordanian citizenship.