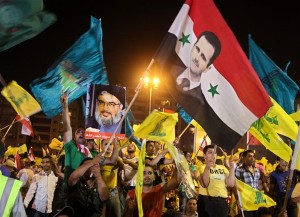 On a hill a short drive from Lebanon’s border with Israel, bright yellow and green flags lead to a museum whose theater shows footage of troops training or in combat against the backdrop of rousing music and speeches.

Visitors explore a bunker cut into the side of the mountain and once used as a war room, examine some of the weapons picked up over three decades of conflict, and survey a map of its southern neighbor Israel complete with coordinates — all potential targets in a next war.

This museum, which guides say has already welcomed hundreds of thousands of visitors, is a monument to Lebanon’s Hezbollah, the powerful Iran and Syria-backed Shiite militia classified as a terrorist group by the United States.

As the stream of museum-goers shows, local support for Hezbollah holding firm, and by extension, the group’s followers remain loyal to the government of President Bashar Assad. This support remains despite Damascus’ bloody 18-month crackdown, which has sparked accusations of war crimes, on a rebellion sparked by Arab Spring movements sweeping the region.

The reason for this steadfastness is simple – Syria’s continued support of Hezbollah in its struggle against arch-enemy Israel.

“In 2006, we saw our homes destroyed and relatives killed,” Hezbollah supporter Ali Fayed said, referring to the month-long war with Israel that claimed an estimated 1,300 Lebanese lives. Around 160 Israelis were also killed during the conflict.

Over a cup of strong Turkish coffee in the nearby village of Tibnin, Fayed said his support for the militia – and Syria – was the result of the mistreatment of his fellow Lebanese by Israeli soldiers during the 22-year occupation of Lebanese territory before withdrawing in

Then war broke out in 2006. Despite the devastation wrought throughout Lebanon during the conflict, Hezbollah, with Syrian arms and support, managed to halt the advances of the most powerful army in the region.

The war garnered Hezbollah’s leader, Hassan Nasrallah, widespread respect across the Arab World. Flags adorned with Hezbollah’s logo — an arm holding an assault rifle, extending from the party’s name in green Arabic letters against a yellow background — flies across the region and Nasrallah is now a household name.

The war solidified Hezbollah loyalists’ support for Syria and, when asked for his views on the uprising there, Fayed took a firm position.

“Assad helped us in our fight against the Israelis. Those who are fighting against him want to destroy the resistance,” Fayed said, “But the resistance (against Israel) will prevail.”

The links between Hezbollah and Syria were stressed emphatically in July during a speech by Nasrallah who defended his support for the Assad regime.

He highlighted how Syria had been an ally against Israel, supplying Hezbollah and the Palestinian militia Hamas with weapons used during the recent wars with Israel.

“The Syrian leadership was risking its interests and existence in order for the resistance in Lebanon and Palestine to be strong. Show me one other Arab regime that does the same,” Nasrallah declared.

“Bashar [Assad] is a good man,” said Louay Hashem, a taxi driver from the southern town of Bint Jbeil. “The people who are causing trouble in the country are the terrorists. They are sponsored by Qatar and Saudi Arabia who want to take over the country for their own interests.”

These are views repeated time and again by Hezbollah supporters, and follow the narrative of news outlets such as Al Manar, a television station affiliated with the party.

“The resistance (to Israel) is the priority for the party,” explained Nicholas Blanford, a Hezbollah expert and author of Warriors of God: Inside Hezbollah’s Thirty-Year Struggle Against Israel.

“The Assad regime forms part of the axis of resistance [together with Hezbollah and Iran] and its demise would be a significant blow to the axis,” he added.

According to Blanford, steadfast support by Hezbollah members for the party’s position on Syria is unsurprising considering the fact that the conflict is increasingly being seen as a regional battleground, with Hezbollah and Iran supporting the regime while Saudi Arabia, Qatar and other Gulf States back the rebels.

Further afield, Russia and China have repeatedly vetoed U.N. Security Council resolutions that Western and some Arab countries had hoped would pile pressure on Assad to end the conflict.

Fouad, a resident of Hezbollah’s Beirut stronghold of Dahiyeh, who asked for his full name to be withheld, described how Syria has always been a dependable ally in the group’s conflict with Israel “unlike other traitor nations [in the region] that claim to support the resistance but in reality do not.”

Moreover, Fouad stressed the importance of Syria as a Shiite-friendly ally in a region dominated by Sunni governments.

According to Ali Wehbe, a mechanical engineering student and Hezbollah loyalist, the group supports calls by the Syrian people for regime reform, but feels that the conflict has been exploited by Western countries, Turkey and Gulf States to pursue their own agendas.

Crucially, if Assad falls many believe a key pillar in the war against Israel will disappear.

So the methods employed by the Assad regime were harsh, but understandable, Wehbe said.

“Just as the Allies had to shell Germany to rid it of Hitler and his Nazi ideology [in World War II], the methods employed by the Assad regime are a tragic but necessary evil,” he said.