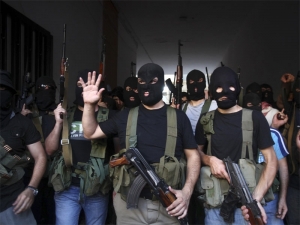 Enraged Lebanese clansmen attempting to win the release of a relative they say is being held by rebels in Syria kidnapped as many as 40 Syrians with alleged ties to the rebel Free Syrian Army on Wednesday. It is one of the clearest signs yet that the conflict in Syria is spilling over its borders and destabilizing its neighbors.

The abduction of the Syrian men and a Turkish national in Lebanon came just a day after an Internet video was circulated showing Hassan al-Meqdad, a Lebanese citizen, being interrogated by a Syrian rebel while three gunmen stand behind him. In the video, Meqdad says he is a sniper who was sent to Syria by the Lebanese Hezbollah movement as part of a group of 1,500 fighters with instructions to help the Assad government.

Hezbollah issued a statement Tuesday denying that Meqdad was a member. Meanwhile, Col. Malik Kurdi, a deputy commander of the Free Syrian Army, said he could not confirm whether Meqdad was being held by FSA fighters or members of another armed group in Syria.

In a nearly identically posed video broadcast Wednesday, three gunmen stand behind two captured Syrians with a banner behind them reading “Al Meqdad Clan,” as a Meqdad member asks them questions in the presence of a reporter from the Lebanese MTV news channel. 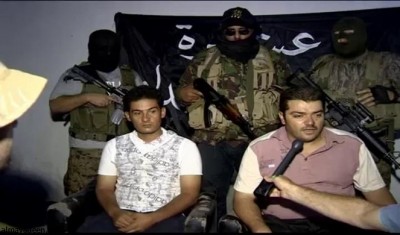 The first man identifies himself as Mohammed Musa Issa and says he is a member of the FSA from Daraa who helps recruit and procure weapons for the Syrian rebels in Lebanon. The second man gives his name as Maher Al-Housarnabi and says he is also an FSA member who assists Issa.

Absent from both videos is any expression of the seething sectarian anger between Shiite and Sunni Muslims that is partly driving the tit-for-tat kidnappings and that observers fear could easily spin out of control.

Lebanon’s Meqdad clan members are mostly Shiites, many of whom support Hezbollah, in the eastern Bekaa Valley and the southern suburbs of Beirut, a Hezbollah stronghold. The rebels in Syria are mostly Sunnis who accuse Hezbollah of supporting a government dominated by Alawites, a religious sect that is an offshoot of Shiism, politically and militarily.

The Syrian conflict also has a broader regional dimension, with Saudi Arabia, Qatar and Turkey (all countries with a Sunni majority) supporting the opposition, while predominantly Shiite Iran backs the government.

Lebanese men protesting the kidnapping of Meqdad in Syria, as well as 11 Lebanese pilgrims kidnapped in late May who are reportedly still in rebel custody, burned tires and blocked the airport road in Beirut on Wednesday evening.

Separately, a report issued Wednesday by the U.N. Human Rights Council in Geneva concluded that Syria’s military and pro-government shabiha militia perpetrated war crimes and crimes against humanity in the massacre of more than 100 civilians, nearly half of them children, in the village of Houla on May 25, potentially laying the groundwork for the prosecution of senior government officials, including President Bashar al-Assad, in international court.

The commission of inquiry also concluded that there are “reasonable grounds” to assert that the Syrian government, pro-government shabiha militia and armed anti-government forces committed war crimes and crimes against humanity during the country’s now 17-month-long uprising.

It found, however, that the most egregious abuses were carried out by forces loyal to Assad and acting “with the knowledge, or at the behest, of the highest level of the government.”

The commission’s findings confirm its claims that the warring parties committed crimes against humanity during a conflict that the United Nations says has led to the deaths of more than 14,000 people. But, for the first time, it accuses the various groups of war crimes and other violations of international humanitarian and human rights law.

The commission, which was established in August 2011, dismissed government claims that anti-government forces were responsible for the killings in Houla. More than 100 civilians, including 41 children, were killed in the gruesome military-backed operation, which marked a sharp escalation in the violence in Syria. Some had been killed by shelling but “most appeared to have been shot at close range,” the report said.

“The commission confirms its previous finding that violations were committed pursuant to State policy,” according to the report. The commission also “found reasonable grounds” to believe anti-government opposition forces committed war crimes, including murder and extrajudicial executions and torture, but that the abuses “did not reach the gravity, frequency and scale of those committed by government forces and the Shabbiha.”

The Syrian military continued shelling and ground attacks Wednesday in more than half a dozen cities across the country, leaving at least 178 dead, according to the Local Coordination Committees, an activist network. At least 30 people were killed in an airstrike on the northern town of Azaz. A video distributed by opposition groups showed crowds of men chanting “God is great!” while digging crushed bodies out of the rubble.

The blast site is also close to a club for military officers and the Defense Ministry. The FSA claimed it carried out the attack but said the target was the Syrian security forces, not the U.N. monitors.

“The bomb was placed to target a high and very important military personality in the army command,” said Kurdi, of the FSA. “In my opinion, what happened is that the bomb went off later than the time set.”

Photos posted by the official Syrian Arab News Agency (SANA) showed a black plume of smoke billowing into the sky from the blast site and firemen dousing the mangled diesel truck and charred buildings nearby.

Faisal Mekdad, Syria’s deputy foreign minister, visited the area and said that no U.N. staffers were injured in the attack. “The terrorist explosion is another attempt by those who seek to distort the civilized image of Syria and its people,” he said, according to the official SANA news agency.

U.N. humanitarian chief Valerie Amos is currently in Damascus on a short trip, but it was not clear whether she was anywhere near the hotel at the time of the explosion. About 100 U.N. observers remain in Syria from a larger team sent to monitor a U.N.-backed cease-fire that never took hold. They have dramatically reduced their monitoring work because of the widespread violence in the country.

Photo: Shiite masked gunmen from the Meqdad clan, gather at the Meqdad family’s association headquarters in the Dhahiya, a southern suburb of Beirut, known as the Hezbollah stronghold – Source: Reuters