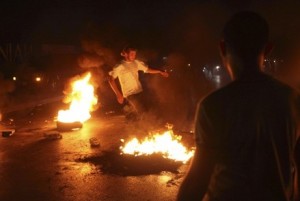 Saudi Arabia, the United Arab Emirates and Qatar have told their citizens to leave Lebanon after Shiite gunmen kidnapped more than 20 people. It comes amid signs that violence in Syria is spilling across the border.

Lebanon’s National News Agency reported on Wednesday that Saudi Arabia told its citizens to leave after “clear threats against them.”

Qatar, meanwhile, cited “the unstable security situation,” for its message to its citizens.

The Sunni Gulf states issued the warnings shortly after Lebanese Shi’ite gunmen kidnapped more than 20 people. A Turk, a Saudi and several Syrians were among those abducted in Beirut in an area controlled by Hezbollah Shi’ite militants.

Members of a powerful Shiite Lebanese clan said they had carried out the kidnappings in retaliation for the capture of one of their own in Syria by the Free Syrian Army two days ago. The Meqdad clan threatened further abductions until kinsman Hassan al-Meqdad was released.

“Tomorrow the number may rise to 50, because it is the only way to save the life of Hassan,” the kidnapped man’s brother Hatem al-Meqdad warned. “And those who ordered his kidnapping will pay dearly,” he said.

Lebanese Prime Minister Najib Mikati condemned the kidnappings in a statement on Wednesday, describing them as “unacceptable”.

“This is not an appropriate way to solve the kidnapping of a Lebanese citizen in Syria and brings us back to the days of the painful war, a page that Lebanese citizens have been trying to turn,” he said.

Qatar, Saudi Arabia and Turkey are all led by Sunni Muslims and strongly support the mainly Sunni Muslim rebels fighting the Syrian president.

Lebanon, meanwhile, has been polarized by events in Syria with its Sunnis supporting the rebels and Shi’ites, including the powerful militant group Hezbollah, mainly backing Assad.

In a further indication that the conflict is spreading across the border, rioters blocked the road to Beirut’s airport on Wednesday, forcing Air France to divert one of its flights. In a statement Air France said it was unable to land for “security reasons” after relatives of Lebanese hostages held in Syria closed the highway.