20 Shiites forced off buses and killed in Pakistan 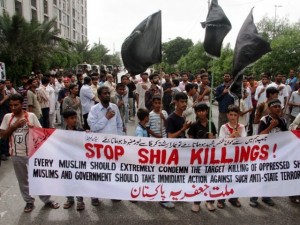 A Pakistani official says gunmen forced 20 Shiites off buses in northern Pakistan and killed them.

The police official said the incident happened Thursday in the Naran Valley.

The official spoke on condition of anonymity because he was worried about retribution.

The Deputy Inspector General of police in Gilgit, Ali Sher, said the victims were traveling from Rawalpindi, near the capital Islamabad, to Gilgit, a mostly Shiite area.

There have been several such sectarian attacks in the region in the past. Many Sunni extremists do not view Shiites as true Muslims.

CBS News’ Farhan Bokhari reports the attack comes at a sensitive time for predominantly Muslim Pakistan. On Friday, the country’s Muslims will celebrate Jumatul wida – the last Friday of the Islamic holy month of Ramadan, which is an occasion that typically sees large gatherings of friends and family.

A senior government official who spoke to CBS NEWS on condition of anonymity warned that Thursday’s attack could provoke Shiite protests on Friday and increase sectarian tension across the country.

Though a minority in comparison to the Sunni Muslim majority in Pakistan, Shiites still comprise a significant portion of the nation’s population – between one fifth and one third of the populace, depending on the estimate.