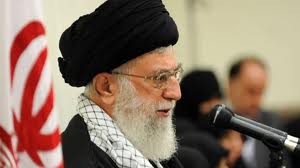 Israel is an artificial “outgrowth” in the Middle East that “will disappear,” Iran’s supreme leader, Ayatollah Ali Khamenei, said ahead of rallies on Friday against the Jewish state and supporting the Palestinians.

The annual Quds Day marches were started in 1979 after the founding of the Islamic republic. The protests use the word Quds, derived from Arabic, to designate the city of Jerusalem.

Khamenei, in a speech late Wednesday, said the “star of hope” that shined on Iran during its Islamic revolution, and in its 1980-1988 war with Iraq “will also shine for Palestine and its Islamic land will definitely be returned to the Palestinian nation.”

He railed against Israel, saying: “This bogus and fake Zionist outgrowth will disappear off the landscape of geography.”

Friday’s rallies, he said, would be “a blow to the enemies of Islam and Palestine” and added that Iran views supporting the Palestinian cause “a religious duty.”

This year’s Quds Day marches will take place amid heightened tensions between Iran and Israel.

The Jewish state has greatly raised bellicose rhetoric threatening air strikes against the Islamic republic’s nuclear facilities, which Israel believe are being used to develop atomic weapons that could destroy it.

Iran denies its nuclear programme is anything but peaceful.