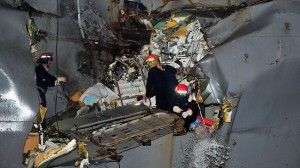 A U.S. Navy guided missile destroyer was left with a gaping hole on one side after it collided with an oil tanker early Sunday just outside the strategic Strait of Hormuz.

The collision left a breach about 10 feet by 10 feet in the starboard side of USS Porter. No one was injured on either vessel, the U.S.Navy said in a statement.

The collision with the Panamanian-flagged and Japanese-owned bulk oil tanker M/V Otowasan happened about 1 a.m. local time. Photos released by the Navy showed workers standing amid twisted metal and other debris hanging down from the hole.

The cause of the incident is under investigation, the Navy said, though the collision was not “combat related.” There were no reports of spills or leakages from either the USS Porter or the Otowasan, the Navy said.

Navy spokesman Greg Raelson said the destroyer now is in port in   Jebel Ali , Dubai. “We’re just happy there were no injuries,” he said. “An investigation is under way.”

The USS Porter is on a scheduled deployment to the U.S. 5th Fleet, which is based in Bahrain, an island nation in the Gulf, near Iran.

The Strait of Hormuz, at the mouth of the Gulf, is a crowded and tense waterway where one-fifth of the world’s oil is routed. Tensions have risen there over repeated Iranian threats to block tanker traffic in retaliation for tighter sanctions by the West. The sanctions are aimed at persuading Iran to abandon its uranium enrichment program, so far without success.

Tensions in the Strait of Hormuz show no sign of abating.

The  United States stoked the flames recently with an announcement that it will send U.S. Navy minesweepers and warships into the Gulf for exercises. The U.S. military maneuvers scheduled for September, to be joined by ships from about 20 American allies.

This is part of a Pentagon buildup in the Gulf with more troops and naval firepower, seeking to rattle Iran and reassure  Saudi Arabia and Washington’s other Guld Arab partners worried about Iran’s influence and power.

Iranian commanders and political leaders have stepped up threats and defiant statements in recent weeks over the Strait of Hormuz.

While it appears unlikely that Iran is ready to risk an almost certain military backlash by trying to close Hormuz — which is jointly controlled with Oman — the comments from Tehran show that Iranian authorities see the strait as perhaps their most valuable asset in brinkmanship over tightening sanctions.

Warnings from Tehran in the past about possible closure have been enough to boost oil prices to offset the blow of sanctions. It’s also among the potential flashpoints if military force is used against Iran over its nuclear program.

Three years ago,   The USS Hartford, a nuclear-powered submarine based in Groton, Conn., collided in the strait with the   USS New Orleans, a San Diego-based amphibious ship.

USS New Orleans’ fuel tank was ruptured, and 15 sailors on the Hartford suffered minor injuries. The collision caused $2.3 million in damage to the New Orleans, and the cost so far of repairs to the Hartford is $102.6 million.

Photo: Navy personnel inspect damage to the US guided-missile destroyer USS Porter following a collision with a bulk oil tanker in the Strait of Hormuz. Picture: AFP Source: AFP