Turkey, long the organising hub of the Syrian uprising against Bashar al-Assad, may have bitten off more than it can chew. It is not just that any shot fired in Syria echoes around the region. One possible consequence of the post-Assad world is suddenly becoming alarmingly clear to Turks: another Kurdish entity on its southern border when Ankara is nowhere near resolving its own Kurdish unrest, which is reigniting a nagging insurgency in south-east Turkey.

The essential facts are these. Over the past month, accelerated by the Syrian rebel offensives in Damascus and Aleppo, the Assad regime pulled back most of its forces from its north-eastern border with Turkey. Syrian Kurds have stepped into the vacuum; Kurdish flags fly over all but one big town, Qamishli.

The forces taking over, and declaring the region under their self-government, are the Democratic Union Party (PYD) and the Kurdish National Council (KNC). The latter is a very disparate coalition grouping of more than a dozen organisations, some of which look not much more than letterheads. The PYD, by contrast, is a deep-rooted and disciplined movement, allied to the Kurdistan Workers’ Party (PKK). Turkey has fought an episodic but bitter war against the PKK since 1984, throughout the south-east and across the border in the Qandil mountains of northern Iraq, at a cost of more than 40,000 lives.

What Ankara sees now is a PKK proxy establishing a stronghold in northern Syria, conjuring up the spectre of a confederation of Kurdish territories. That looks to the Turkish establishment like an embryonic Kurdish state that will try to bite off chunks of the predominantly Kurdish south-east of the country. “We will not allow a terrorist group to establish camps in northern Syria and threaten Turkey,” thundered Recep Tayyip Erdogan, the prime minister, last month.

Constitutional charades and sham elections aside, the only concrete measure President Assad took to address his opponents’ demands was to grant citizenship to about a tenth of Syria’s 2.5m Kurds who were stateless. The Assad regime also resumed its dalliance with the PKK, broken off in 1998 after Turkey massed tanks on the Syrian border and Hafez al-Assad, Bashar’s father, withdrew his support for Abdullah Ocalan, the now jailed PKK leader.

These moves were intended to keep the Kurds from joining the revolution and to use the PKK – and, in Turkish eyes, PYD – as gendarmes in Kurdish areas. Some Turkish officials believe Damascus co-ordinated its withdrawal with the PYD, a suspicion heightened by the fact that the PKK has many Syrian Kurds in its ranks, including Fehman Hüseyin, its commander.

Almost as alarming to Ankara is the role in this affair of Massoud Barzani, president of the Kurdistan regional government of northern Iraq. The strides the KRG has taken towards de facto self-determination within the loose and increasingly frayed confederation of Iraq are a beacon to all Kurds and nowhere more so than in what they call “western Kurdistan” – Syria’s Kurdish territories. 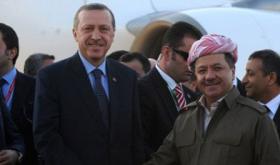 But Mr Erdogan had developed a close rapport with Mr Barzani, using him as an intermediary on the Kurdish issue, as well as developing close economic ties between Turkey and the KRG. Ankara was even willing to upset Baghdad, recently signing pipeline deals with the KRG to carry oil and gas from the disputed Kirkuk area to Ceyhan on the Turkish Mediterranean.

Yet it was Mr Barzani who brokered the PYD-KNC takeover.

Ankara’s relationship with the KRG will now be determined by its perception of the wily Mr Barzani’s ambition for an eventual Greater Kurdistan and Turkey’s almost pathological fear of it.

The Kurds, dispersed over Syria, Iraq, Iran and, above all, Turkey, were the great losers of the post-Ottoman settlement in the region after the first world war. If the arbitrary frontiers set then by predatory European colonialists to foster favoured minorities in Syria and Iraq are now coming apart, Turkey will surely believe that the Kurds will seize this historic opportunity to create, at last, a state. How, therefore, should it respond?

The temptation to charge across the Syrian border will be strong. But the proper response would be for Mr Erdogan to use the new constitution he wants for Turkey to accommodate its Kurds’ demands for cultural freedom and a degree of self-government. While the neo-Islamist Erdogan government has gone furthest to address Kurdish grievances, that is no longer enough.

“The right policy response to this threat is for the Turkish body politic to finally and permanently address Turkey’s own Kurdish problem,” says Sinan Ulgen, head of Edam, the leading Istanbul think-tank.

Yavuz Baydar, another prominent Turkish commentator, says the latest turn of Kurdish events should force the government “to adopt a radical, reformist policy, if it ever wants to be a regional power that remains in the vanguard of developments”.

Mr Erdogan had been having a good Arab spring. Now comes the test of whether he deserves to.