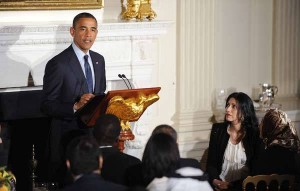 President Barack Obama on Friday called Huma Abedin, a top aide to Secretary of State Hillary Clinton, an “American patriot” after a group of Republican lawmakers accused her of having ties to the Muslim Brotherhood, an Islamist political organization.

“She has been nothing less than extraordinary in representing our country and the democratic values that we hold dear,” Obama said at a White House Iftar dinner celebrating the Islamic holy month of Ramadan.

“The American people owe her a debt of gratitude because Huma is an American patriot and an example of what we need in this country — more public servants with her sense of decency, her grace and her generosity of spirit.”

In June, Representative Michele Bachmann along with four other Republican lawmakers questioned Abedin’s security clearance in a letter to the State Department’s inspector general. They suggested members of her family had connections to the Muslim Brotherhood, which the writers said may be seeking access to high levels of the U.S. government.

“If my family members were associated with Hamas, a terrorist organization, that alone could be sufficient to disqualify me from getting a security clearance,” Bachmann said on conservative host Glenn Beck’s talk show.

Abedin, a Muslim, was seated on Obama’s right at the dinner and appeared visibly moved as the president spoke to a room full of religious leaders, elected officials and diplomats.

Greater participation of female athletes at the Olympics was another focus of Friday’s dinner. Obama noted that for the first time in Olympic history each team included a woman.

“One of the reasons is that every team from a Muslim-majority country now includes women as well,” he said.

Since taking office, Obama has focused on strengthening ties with the Muslim world. At a speech in Cairo in 2009 he called for “a new beginning between the United States and Muslims around the world” based on “mutual interest and mutual respect.”

Friday’s dinner takes place amid a time of seminal change in the Middle East – home to over 300 million of the world’s 1.5 billion Muslims. Over the past year, revolutions in Egypt, Tunisia and Libya have felled decades of authoritarian rule, tensions with Iran continue to escalate and a bloody 17-month uprising in Syria shows no signs of abating.

Thomas Jefferson held the first known White House Iftar in 1805, a sunset dinner in honor of Tunisia’s envoy in Washington.