UN chief: “There will be no winner in Syria “

The possibility of a drawn out civil war in Syria looms, as fighting continues across the country. Assad’s army has ceded ground elsewhere in order to focus its resources on fighting in Aleppo. In the meantime, the U.N. may name a new envoy to replace Kofi Annan next week.

Syrian forces have pushed rebels back from a strategic district of Aleppo, but skirmishes continued in the city and the United Nations said the conflict engulfing Syria would have no winner.

Diplomats told Reuters that veteran Algerian diplomat Lakhdar Brahimi could be named next week to replace the U.N.-Arab League Syria envoy Kofi Annan, who resigned in frustration at the international deadlock on how to end the violence.

But they warned their could be last-minute changes if a key government had concerns or the candidate had second thoughts.

Assad, engaged in an all-consuming fight with his mostly Sunni opponents, appointed a Sunni as his new prime minister on Thursday after his predecessor fled on Monday in the highest-level defection so far in the uprising that began 17 months ago.

Wael al-Halki, from the southern province of Deraa where the revolt began, replaces Riyad Hijab, who had spent only two months in the job before making a dramatic escape across the border to Jordan.

Assad’s authority was already shaken by the assassination last month of four of his top security officials and by rebel gains in Damascus, Aleppo and swathes of rural Syria.

But he has persevered with a crackdown on opponents seeking to end half a century of Baathist rule and topple a system dominated by members of the president’s minority Alawite sect.

He has focused his fierce army counter-offensive on Syria’s two main cities, reasserting control over much of the capital Damascus before taking the fight to the northern commercial hub. 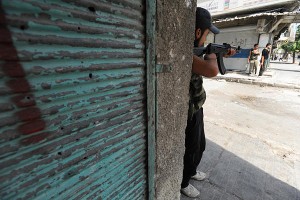 Rebels fighting in the Aleppo district of Salaheddine, a southern gateway to the city, said they had been forced to fall back from frontline positions on Thursday by a fierce bombardment which had reduced buildings to rubble.

“There have been some withdrawals of Free Syrian Army fighters from Salaheddine,” rebel commander Abu Ali said. Others said the main frontlines in the area, which had been held by rebels for more than a week, were now deserted.

The centre of the district, near Salaheddine mosque, was abandoned when Reuters journalists visited on Thursday. The only sound was the constant echo of artillery shelling. There were no rebels, no security forces, and only a few residents darting in and out to pick up belongings – while evading army snipers.

One rebel field commander, who did not want to be named, said 250 people had been killed in Salaheddine in the last three days, mostly by shelling and air attacks.

Rebels said sporadic clashes continued in the district and that while the government had at least 80 tanks stationed in various parts of Aleppo, it appeared reluctant to engage in close combat, preferring to use helicopters and fighter jets.

Sheikh Tawfiq, commander of the Nur al-Din Zinky brigade based on 15th street in Salaheddine, said the army’s formidable weaponry was offset by apparently faltering morale.

“At the 10th street front line we are face-to-face with the army and can hear them make orders on their radios — we hear their commanders give orders to soldiers to advance and they keep urging them to, but the soldiers don’t and are hesitant.

“The commanders have even taken away the soldiers’ mobile phones so that we don’t have a chance to call them and create more defections,” he said.

As the battle for Aleppo raged, Iran, Assad’s closest foreign backer, called for “serious and inclusive” negotiations between the Syrian government and opposition.

Assad has repeatedly said he is ready for dialogue, but he has vowed to crush the armed rebels he says are terrorists. His opponents say he must step aside before any talks, arguing negotiations would be meaningless while the bloodshed persists.

Iran made the call after gathering diplomats from like-minded states in Tehran for talks on the conflict not attended by Western and most Middle Eastern states, which have demanded Assad end his family’s 40-year rule.

The violence has already shown elements of a proxy war between Sunni and Shi’ite Islam.

“There will be no winner in Syria,” U.N. Secretary General Ban Ki-moon said in a statement read by a U.N. representative to the conference in Tehran.

Already stretched by rebel activity in many parts of the country, the military, despite its advantage in tanks, warplanes and helicopters, has had to cede ground elsewhere as it struggles for control of Aleppo.

As part of a broader army offensive, Assad’s forces attacked rebels on several fronts, including a neighbourhood near the airport in southeast Aleppo, several eastern districts, and a town on Aleppo’s northwestern outskirts, state media said.

Despite the violence, the Red Cross delivered food and medical supplies to Aleppo, the first time one of its aid convoys managed to enter the city in several weeks.

Explosions rang out and black smoke billowed from an olive grove. A truck was engulfed in flames. Six children and a crying woman fled their tiny home. One woman held the Koran above her head, kissing it, and another banged her head with her hands. Men stared at the sky and threw their arms up in despair.

Though sympathetic to the rebels, Western powers, Turkey and Sunni Arab states have not intervened militarily. Russia and China have blocked United Nations action against Assad, while Iran has tried to bolster the Syrian leader in an Arab world where many view non-Arab, Shi’ite Iran as a menace.