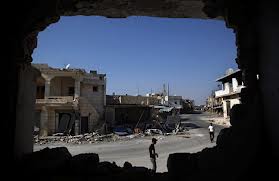 As Aleppo burns, Syria’s regime is gradually losing its image as a well-oiled and organized military machine—and Assad may be more vulnerable than many once thought.

The Syrian regime launched its first sustained ground offensive yesterday into Salahedin, the Aleppo neighborhood that has been under the control of rebel forces for much of the last month. The usual flurry of competing narratives ensued. The regime said it had cleared the area of so-called “terrorists,” its term for the fighters working to bring down president Bashar al-Assad. The rebels announced their own gains, while denying accounts that they’d been forced to retreat. Neither account proved true. By nightfall, both sides seemed to settle back into their positions, and Aleppo braced for a long and bloody fight.

“Government claims to have conquered the enemy stronghold were false, as were the rebels’ later claims to have breached regime lines,” wrote Guardian correspondent Martin Chulov from Aleppo last night, describing a new sense in the city that there is no end to the battle in sight.

Even as rebel commanders admitted today that they had pulled their fighters from Salehedin at dawn, amid heavy bombardment from ranks and fighter jets, there were signs that they felt that momentum in the ever-present information war, at least, may be shifting their way. As it pounds away at Aleppo, the regime is gradually losing its image as a well-oiled and organized military machine. Breaching the Assad façade of quiet, confident control, as it is often described, has been a key element of the Aleppo campaign from the start–the very existence of heavy fighting in the country’s most populous city and economic center suggests that Assad may be more vulnerable than many once thought.

Sitting on the floor of a house packed with Syrian refugees across the border in Turkey, one small-business owner who had recently fled Aleppo flicked his hand back and forth to simulate the act of casually barbequing over a grill—his image of how the city had largely gone about normal life until the fighting reached its gates. “I used to tell my friends, Hama is completely destroyed, so is Homs, so is Daraa, and you are having a barbeque,” he said, listing off the smaller cities that were leveled by the regime for their resistance efforts. “They used to say, ‘No way. Nothing will happen here.’”

Meanwhile, events in Damascus have suggested that Assad’s government may be in a state of increasing disarray. There was the embarrassing defection this week of its newly appointed prime minister, who labeled his old camp a “killing and terrorist regime” on his way out the door. The rebel capture of 48 Iranians near Damascus dealt the regime another black eye, with the government’s claims that the group were religious pilgrims belied yesterday by a Wall Street Journal report that found they’d booked their trip through a special travel agency that “is not open to the Iranian public and solely caters to members and families of Guards or the plainclothes Basij militia.”

The rebels seem to be seizing the opportunity to make the case for their own seriousness in the fight—as one of their chief spin doctors, Ammar al-Wawi, who commands a battalion in Aleppo, did in an interview last week. The opposition was on the offensive, he said, and it was Assad’s forces that were now on their back foot. From Aleppo, rebel fighters proudly share photos of destroyed regime tanks, while Al Jazeera yesterday published one purporting to show a downed fighter jet.

As the Syrian military shells Aleppo, meanwhile, a prominent opposition group announced yesterday that a number of leading rebel commanders and battalions had signed onto an 11-point human rights charter. Among other things, the charter promises to respect “international laws governing human rights.”

The more optimistic among the opposition talk of Aleppo as a proving ground for the rebel forces—both to a Syrian audience and to an international as well. Some even see it as a potential Syrian version of Benghazi, which would pave the way for a safe zone and supply corridor from neighboring Turkey—and also strengthen the rebel case for international support. Hazem Dakel, a young activist who was in the Turkish border city of Antakya on his way to Aleppo yesterday, said he thought the rebels had lately made their case. “I believe that Aleppo gave morale to the rebels, and we have seen them fighting valiantly on the ground. They move freely every day, and control new areas,” he said. “I think it will be a Benghazi to Syria.” (Ammar al-Wawi, the commander and rebel spokesman, used the Benghazi analogy as well, though with the caveat that even under that scenario he didn’t see any international support on the way.)

As the bombs continue to fall on Aleppo, though, some opposition leaders see the question of foreign help as already settled—and possibly beside the point. One of the revolution’s foremost activists, Razan Zeitouneh, bristled at the suggestion that the Syrian opposition needed to prove something to anyone but themselves. “It’s worth answering for us, but not to the West,” she said. “They shouldn’t bother themselves with asking such questions anymore.”