Syria’s Palestinians flee to Lebanon, but for how long? 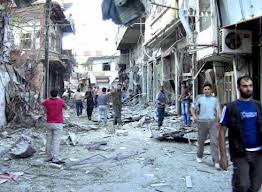 At the edge of a sprawling Palestinian camp in south Beirut, Syrian volunteers unload two dozen boxes from the trunk of a taxi. Young boys help carry them into the dark, narrow alleyways where families peer out from underground houses that were bomb shelters during Lebanon’s past civil wars.

Down a series of winding passageways and into a two-room house, the boxes are dropped off. Syrian volunteers open and count the medical supplies: bandages, cotton swabs and the pain relievers, all obtained from Doctors Without Borders.

The descendents of Palestinian families who fled to Syria during the Arab-Israeli war of 1948 are now fleeing the fighting in Syria. About 800 such families have crossed into Lebanon over the past 10 days from camps in Damascus and other parts of Syria.

Unwanted by the Lebanese, the Palestinians stay in hiding. Mohammad al-Ali, 39, who fled Damascus two weeks ago with his wife and three children, came to a camp here looking for medicine for his daughter who has a skin condition.

He said the Palestinian district of Damascus where he lives is virtually dead.

“The regime’s army moved in last week and started shooting civilians at point-blank range,” he said. “There were FSA (Free Syrian Army) guys staying in an apartment above my house. I haven’t been able to get through to any of my neighbors on the telephone. I’m sure my house has been destroyed.”

On Thursday, Syrian rebels said they were low on ammunition but still fighting Syrian dictator Bashar Assad’s forces in the city of Aleppo, the nation’s largest city and commercial hub.

The Syria state news agency said Assad’s forces had regained control of the main rebel area in Aleppo as the Syrian army attempts to put down an uprising that began in March last year. The fighting has left an estimated 18,000 civilians dead, according to the United Nations.

Neighboring Lebanon has seen little of the violence, but the number of refugees pouring in is growing. The last time Palestinians moved into Lebanon in a major way was around the time when the Palestinian Liberation Organization tried to make it a base of operations, sparking a 15-year civil war that claimed more than 200,000 lives.

“There is a general malaise in Arab countries in their approach to Palestinians, (and) Lebanon is not an exception,” said Hilal Khashan, a professor of politics at the American University of Beirut. “The specter of Palestinian immigration into Lebanon is a persistent fear.”

Lebanon is home to more than 230,000 Palestinians who mostly live in segregated camps. Lebanese forces are not allowed into the camps where security is overseen by Palestinian factions. The Sabra and Shatila camps in south Beirut were the scenes of massacres in 1982 during the nation’s civil war.

In summer 2007,nearly 400 people were killed in fighting between the Lebanese army and Islamists who had barricaded themselves inside the Nahr al-Bared camp in northern Lebanon.

Al-Ali has no passport, like many of the more than half a million Palestinians in Syria. He cannot travel outside the country legally except for short excursions to Lebanon under special circumstances.

“I was given permission by the Syrian authorities to come to Lebanon for a week. That time has already passed,” he says. “Now we have broken their rules by staying too long in Lebanon, so it is difficult for us to go back. We are afraid of getting into trouble with the Syrian authorities.”

Palestinian authorities in the West Bank have tried to help. Last weekend, trucks loaded with flour, rice, sugar, lentils, chickpeas, pasta and medicine left Ramallah for Syria, but it was not known whether Syrian authorities would allow the convoy to enter the country.

In Lebanon, Al-Ali is handed a medical kit for his daughter and is told to wait a week before coming back for more help.

“The government now controls my neighborhood in Damascus,” he says as he heads out the door. “Maybe we have nothing to go back to.”