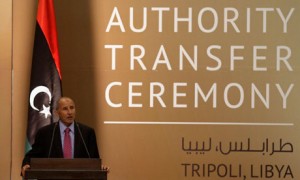 In a ceremony late on Wednesday, Libya’s first elected assembly took over power from the transitional council that has ruled the country since last year’s uprising against longtime dictator Muammar Gaddafi.

The ceremony marked the first peaceful power transfer in Libya’s modern history. Gaddafi took control in 1969 in a bloodless coup that deposed King Idris and ruled as a dictator.

The handover comes as Libya faces daunting challenges. The transitional government failed to unite powerful militias under a national army. Instead, the militias and rival tribes often clash from their power bases in different parts of the country. Also, eastern Libya complains it is still under-represented in the new government, as it was under Gaddafi, and there is talk of setting up a semi-autonomous government there.

Mustafa Abdul Jalil, head of the outgoing National Transitional Council, gave a conciliatory speech before dissolving his council and transferring power to the new assembly. He acknowledged the NTC’s failures in restoring security but said that the council ruled in “exceptional times”.

“We forgive those who harmed us,” he said, drawing chants like “the blood of the martyrs will not go in vain” along with clapping and cheering.

The 200-member assembly convened late at night with tight security measures on the anniversary of the liberation of Tripoli, when rebel forces marched into the capital, defeating Gaddafi’s forces after months of deadly battles across the nation that left tens of thousands of dead and wounded.

Fireworks lit the sky as Libyans celebrated while breaking their daily fast for the Muslim holy month of Ramadan. While the official handover ceremony was taking place, hundreds of Libyans in Tripoli’s Martyrs Square held candles symbolising reconciliation.

The timetable calls for the new assembly to name a president within a day and then form a government within 30 days of its first session late on Wednesday. There are three main blocks in the new assembly: Islamists, including the Muslim Brotherhood and ultraconservative Salafis; liberals and moderates led by wartime prime minister Mahmoud Jibril; and a bloc of independents.

The nation will have to build its institutions from scratch, as Gaddafi ruled for four decades by himself, without a legislature. Also, Libya is awash with arms left over from the civil war.

Nizar Kawan, an independent lawmaker associated with the Muslim Brotherhood, said, “There are mounting challenges waiting for us, from restoring security to improving the economy.”

It is not clear yet if the new assembly will choose the panel drafting a new constitution, or if the 60-member panel will be directly elected by the people.